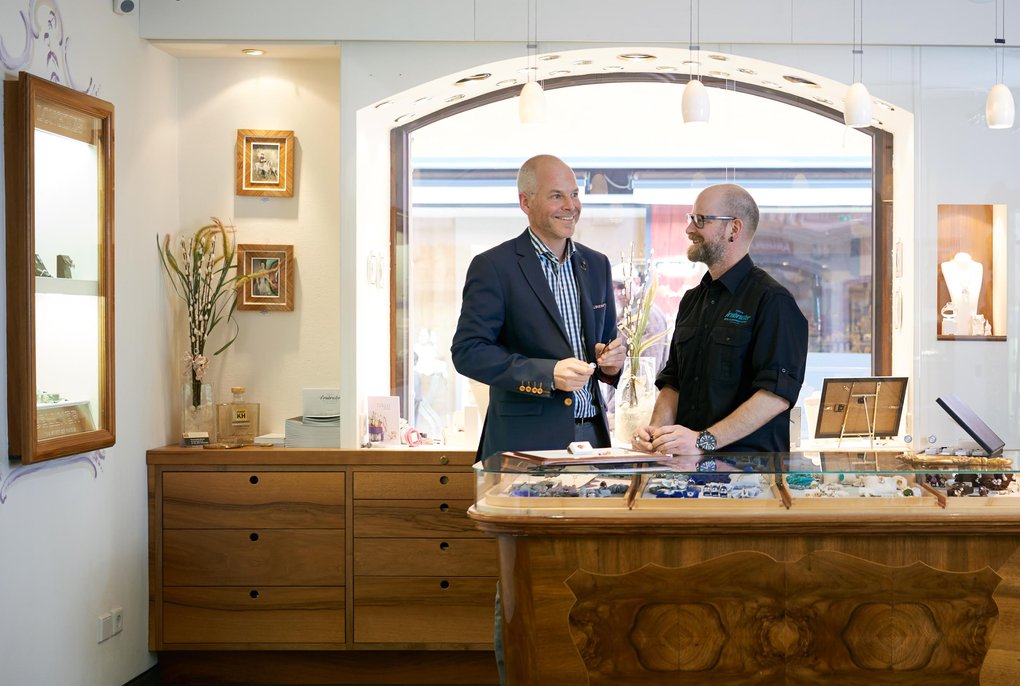 They are two brothers who couldn't be more different: one is an eloquent businessman and passionate gemmologist, the other a creative craftsman. When the time came for them to take over the jewellery shop their grandmother had founded in Seefeld, Stefan and Jürgen Armbruster realised how great the challenge they were facing was. They not only had to live up to their individual tasks, but also needed to find a common denominator despite their opposing characters. And that started with their business's name.
The brothers share their story with Best of the Alps and reveal how they found common ground both in their different jobs and the traditions of their family business.

"The salesroom was like an extension of our playroom, we spent a lot of time there while our grandmother and father attended to the customers," Stefan and Jürgen remember. Now they run the shop and continue the family business, which began in a small rented space in a former farmhouse in 1937. Grandmother Johanna earned her living as a jeweller during the war and proved that she had a hand for business. "Grandma always knew where there was a new business opportunity. And when something didn't work out, she tried something else," Jürgen reveals.
So was it an obvious choice to take over the family business together?

"I'd say our parents had a clever hand in it," Stefan answers with a smile, while Jürgen almost diplomatically adds: "They recognized early on where our talents lay, that I'm more of a businessman, while Stefan is the craftsman." With a fair amount of sense of self in their genes, Stefan and Jürgen brought what they had to the table and discussed "where the road could take us."

Emotion as a new value

Until then, the shop in Innsbrucker Straße was known as the "Tiroler Schmuckkastl", the Tyrolean jewel box. But that wasn't what the two men envisioned for their future. And so they spent many nights thinking about how to convey the idea of "two brothers, two professions, one tradition" in a name. What in hindsight turned out to be the most obvious thing was a revelation at the time: "We're the Armbruster brothers, jeweller and goldsmith."

While a fine selection of brand names is available in their shop, the focus lies on the workshop, which became an integral part of the business through Stefan, the trained goldsmith. His craftsmanship ranges from producing unique pieces to setting stones. He sees jewellery as something where many emotional strands come together – a thought that lead to the idea of letting wedding couples cast their own wedding rings. News of this romantic idea has spread well beyond Seefeld. "It's a really emotional thing," Jürgen explains, "a wedding ring is meant to last a lifetime."

The Armbruster brothers gladly grant a glimpse behind the scenes for those interested. You can see Stefan, the goldsmith, meticulously working on the most delicate tasks. He balances the highly concentrated work by spending lots of time outdoors, or travelling with his camper. What fascinates him most about his craft is simply put: A piece is not finished until he decides it is.
"We often have customers that are equally amazed and fascinated that someone who works with his two bare hands can create such precision and beauty. It opens a whole new perspective on value", explains Jürgen. And it creates a sense of joyful anticipation. After all, after their order customers have to wait a while for their piece to be crafted.

The product has been around longer than humankind

Just like their forward-thinking character has been passed on from generation to generation, the Armbruster family shares a love for all things fine and beautiful. Stefan and Jürgen's father, Günther Armbruster, loved gemstone hunting and introduced his passion for gemstones into the business.

"Our Dad often set out to climb the Granatkogel in Ötztal at four in the morning, carrying a pick and a hammer to collect stones. When he came back he would have them polished into shape." That's where Jürgen's love for colours and gems comes from. He truly has a talent for exciting people for things. Customers truly appreciate his expertise. "It's amazing what Mother Nature produced millions of years ago. Like the stunning iridescence of opals caused my microscopically small particles of water. It looks like fire within the stone. This product has been around longer than us humans."
What the Armbruster brothers treasure the most is the process of creating something together with their customers: from the first conversation to the design, to the joy of seeing the finished product.

Even though they both like doing their own thing in their free time – Jürgen goes cross-country skiing, while Stefan prefers kitesurfing – they are the perfect match when it comes to their business. Family is simply the best tradition.