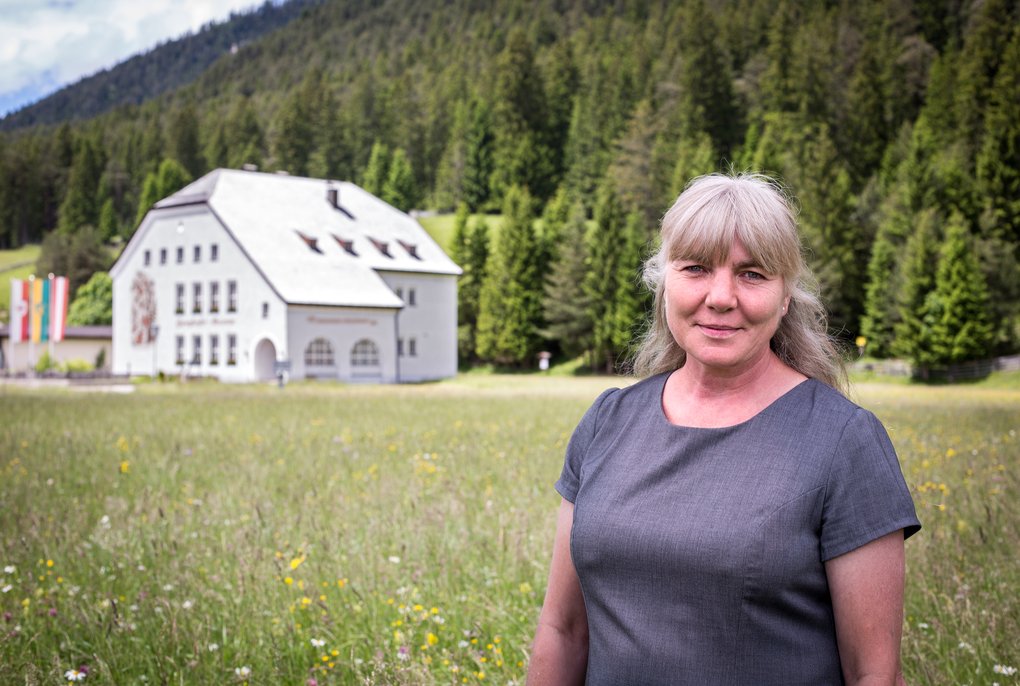 “Oh Luggi, how are the two of us ever going to get anywhere!” was Iris Krug’s first thought when she became the manager of the Ganghofer Museum in Leutasch in 2010. Of course, she thought it in proper local dialect. Making her the museum’s manager was a very surprising move, she says. When her predecessor, Emil Karl Braito (1935-2011) fell ill, he called her and told her he would very much like her to take over the museum. Having worked in tourism so far, she almost “fell from her chair”, she remembers, but deep inside she immediately knew that she couldn’t say no to an offer like that. “I am very much into history, the arts, all things cultural, and I absolutely love to dig to the roots and learn everything about this place and its history. And Dr. Braito knew this.” So this is how it all started.

Today, the former elementary school in Leutasch is much more than a museum on the eponymous writer – and bon vivant – Ludwig Ganghofer, and the village’s history. It is a library, a place for the arts, for readings, exhibitions, talks and much more, open to everyone in Leutasch. In the classrooms where children were taught to read and write and do a somersault, old photographs and documents are on display. You can also see a collection of mounted indigene animals including buzzard, weasel and a semi-white chamois. You better stay away from the latter according to a local superstition, Iris Krug tells us, “If you shoot a white chamois, you will die within the next year yourself.”

But why was Iris Krug so reluctant about getting along with the late “Luggi” Ganghofer, as he was called? Why was she in doubt about being able to relate to this man who lived in a hunting lodge in the nearby Gaistal valley at the turn of the last century, writing his most famous work (“Das Schweigen im Walde” – The silence in the woods, not published in English) off his chest? “I only knew the films made after his books and always found them super corny: a hunter, a poacher, a beautiful woman and a happy ending... But then I started to look deeper into this man and his story and realized how smart he was and how much he was capturing the zeitgeist of his time. In the years following World War I people really needed these phantasies of a perfect, idyllic world,” Iris tells us. She also found out that the writer was very sociable and an accomplished photographer who also knew how to play the zither, and that he was the first one to bring people to holiday in Leutasch. “Whereever ‘the Ganghofer’ was, people wanted to go.” she says. Iris also discovered that Ganghofer was a big supporter of Rainer Maria Rilke, the beloved poet, and the one who brought the German writer and actor Karl Valentin to the limelight. “And he sure knew how to throw a party,” Iris recounts. “There were special nights where men and women swapped their clothes, for example. I’ll leave the rest to your imagination!” she laughs. And just like that, Iris developed a fondness for this guy with all his flaws and talents.

Leutasch – the place of deer, wood and farms

In the former elementary school, you can learn a lot about the writer. For example that he, though surely not very common in those times, ordered wine from South Tyrol and had a private tennis court and a bowling alley where he played with his friends. But in a guided tour with Iris Krug you also hear interesting things about the history of the village of Leutasch which “has luckily been forgotten many times in the course of history because it has always been off the main historic trade routes.” The past of this place may not be as spectacular as others, but it explains “why the Leutasch people are who they are today,” Iris tells us, referring to the charming combination of stubbornness and kindness that people here are said to show. Iris recounts the hardships of a life in poverty, of those long winters when people had to leave and look for work elsewhere. Leutasch was also the main supplier of wood to the Tyrolean towns of Innsbruck and Hall. “When I sit somewhere in the historic centre of Innsbruck sipping an Aperol spritz, the bench is most likely made of wood from Leutasch,” she says with pride. And of course she also tells us about the strong ties to the tradition of hunting in the region, something not only Ganghofer loved. “We are one of Central Europe’s main hunting grounds for red deer. There’s a great bunch of royal stags around here.” A reference to the place’s strong connection to hunting can be found in one of the former classrooms. It is a so-called Stangenbaum – a tree of antlers from one particular stag that have been collected over the years. “In the beginning I just couldn’t believe that the hunters were able to identify the antlers and match them to the respective stag in their hunting district. But they really can.”

Translating the history of Leutasch for today’s audiences is Iris Krug’s job, or, as German composer Gustav Mahler put it, “Tradition is not the worship of ashes, but the preservation of fire.” For this purpose, she follows a multi-sensory approach. In 2012, for example, Iris Krug organised a one-week workshop for the children of the local school where they learned about Leutasch’s long tradition in lumberjacking. “We went to the forest with horses, cut trees with two-man saws, cooked a traditional lumberjack meal and tried chewing tree gum. This way, the kids could feel, smell and taste what life was like back in the day,” she says. Another project was making a cookbook with recipes that had been passed on from generation to generation in Leutasch and presenting it at a cooking event in the museum’s garden. “In the olden days, people ate a lot of potatoes and cheese dumplings and, of course, local brown trout that even Maximilian I. came to fish back in the 15th century.

Today, guided group tours with tastings of fresh cow milk and artisan bread and butter are very popular among hotel guests from Leutasch and nearby. Many are surprised by how familiar these raw, unprocessed foods actually taste. “We hear a lot of ‘Wow, this tastes just like it used to at Grandma’s!’” Iris Krug tells us. “That’s a great motivation for me to continue on this path and I can’t help but think how fantastic our lives could be if we combined what we have today with what we can learn from our ancestors,” she says, also in the light of our throw-away mentality and the need for a more mindful and sustainable way of living.

“Roots form you. No doubt about that.”

Touching people’s senses is one way to revive the past. But knowing about the importance of your roots is also helpful, says Iris Krug. “I really want people to know where they come from. Your roots form you, there’s no doubt about that. When I look at old photographs from our archives I can tell what family they show just by looking at them: The guy in the picture often just looks like some boy you see in the local kindergarten: his great grandson.” Today, locals often bring their own family photos or heirlooms to the museum because they are proud of their history - and that others are interested in it. For Iris Krug, finding these roots and treasures is not just a job. It is a mission that she follows with all her heart and passion  - and that sometimes even sends shivers down her spine. “When I get to see new photos or documents or when I work in the archives, sometimes one thing leads to another and a new door opens. That’s incredibly fascinating,” she says. She just loves her work as much as this place she calls home. “Leutasch really is an incredible spot. Our own little piece of paradise.” Or, as Ludwig Ganghofer put it, “Who God loves he drops in this land.”