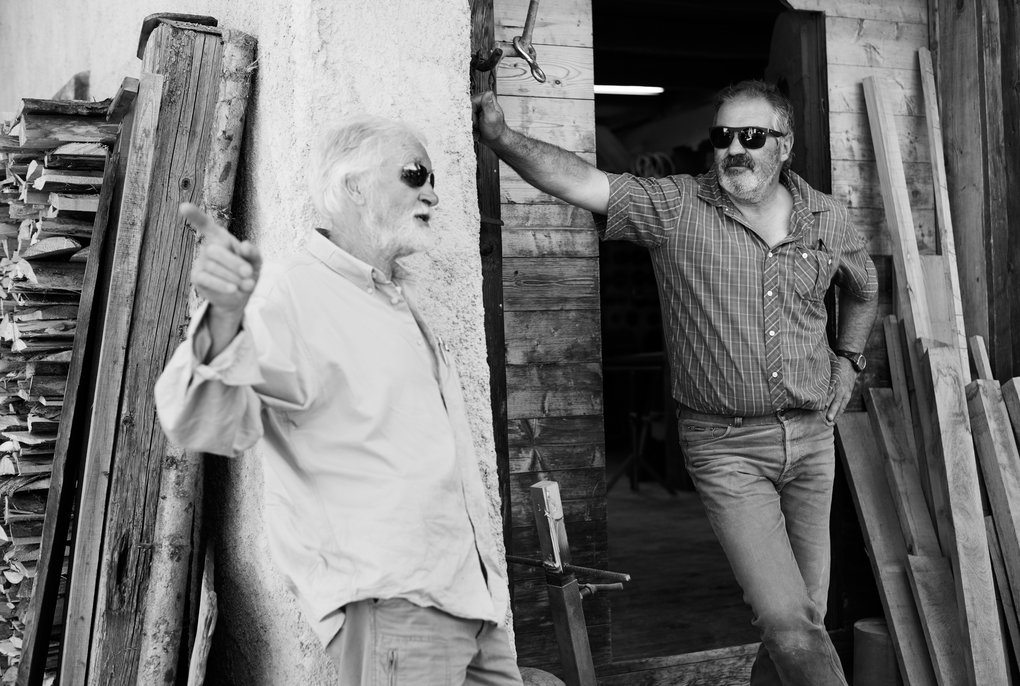 “Even when we don’t talk much, we can anticipate what the other will do,” explains Arthur Forlin. He is an expert knife maker while his friend Jacques Brunet is a gifted bow-hunter. Both men share a passion for craft and nature. Spending time together on their countless hunting excursions in the Megève mountains is the glue that binds their long standing friendship of 35 years.

“Every man or woman who lives in accordance with nature has the feel for using knives. It used to be one of man’s first tools and it still is our preferred tool to work with,” says Mr. Brunet who is a tall, slender and well-spoken former English teacher. Mr. Brunet leads us into the workshop of Arthur Forlin, where the two spend hours toiling away over their tools, which they produce for themselves or their friends only. Taking a closer look at their beautifully crafted knives with handles made from wood or deer horn, and the blades made from recycled steel, it quickly becomes apparent that they have a deep understanding about the importance of balance in nature. Balance is also a subtle principle that seems to govern their friendship.

Watching Mr. Forlin and and Mr. Brunet interact with mutual respect of one another’s skills, one can sense how the strong tie between the two men has developed. It was over their passion for bow-hunting that they bonded. Although Mr. Forlin had to be convinced at first that the philosophy of hunting includes more than just killing an animal, that it is also about gaining a sense of one’s immediate environment. “We rely on each other when we are out in nature together,” says Mr. Brunet. When imagining both of them immersed in the seriousness and pleasure of the hunt, you would not doubt for a moment how they make a sound team: Mr. Brunet, is cerebral, Mr. Forlin follows his intuition.

Feeling the spirit of the Neanderthals

“You only ever get a few successful shots each year,” says Mr. Brunet about the challenge of hunting with bow and arrow. “But what makes worth all the effort is getting the prey with your own tools.” They go for chamois or wild boar and take those who are not likely to make it through winter. “After a day out I feel pleasantly empty,” says Mr. Forlin. “It is hard to explain, I somehow feel closer to the Neanderthals than to the people in the village,” he laughs. Mr. Forlin's deep respect for nature stems from working with sustainable materials for building chalets. The same goes for knife making. “You honor the tree that your piece of wood once has been, as it also had it’s tough times growing up, you know, just as we do,” he says.

“We make our knives in the Scandinavian style with a straight sharp blade. Rather unsophisticated, because it is a tool,” says Mr. Brunet. “But if you know how to use a knife properly you don’t need a specially shaped blade.” What makes their knives even more of a fascinating tool is its low-fi, sustainable production method that becomes apparent when both men lead us from the workshop to a little shed in the garden: Equipped with anvil and hammer, it is the place where both men process materials such as used cables and car springs into perfect blades.

Looking out to the mountains in the glistening summer sun, Mr. Brunet says: “A lot of the beautiful chalets you see around in Megève were built by Arthur.” Mr. Forlin's family migrated from Northern Italy when he was a child, has worked as a carpenter for 30 years, and many of those for a famous local architect called Alexandre Lamblin whose philosophy too was to work in accordance with nature, which had a profound influence on the young Mr. Forlin. “By taking into account weather conditions such as snow and wind directions he figured out how to build the perfect house,” he explains. “In Megève there are still some regulations that impose to cover certain parts of the house with wood; and the slope on the roof is mandatory.”

Traditions go a long way in Megève. Just like some rituals the two men have fostered over the years hunting together: bringing a hearty lunch of sausages, polenta, cheese and a bottle of liquor, burried somewhere along on their trails. But that is a secret.