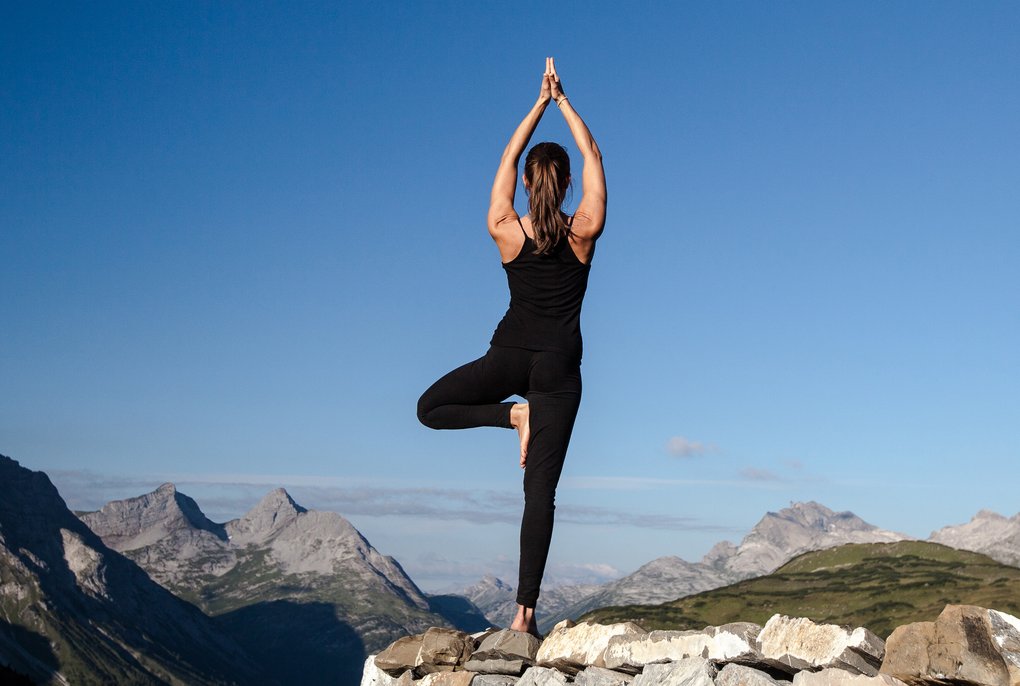 A traditional ski resort in the Alps and Eastern spirituality – can the two go together? "Most definitely," says Anna Reschreiter who left behind a career in business consulting to teach yoga in Lech. After intense and extensive yoga and meditation retreats in Nepal, India, and Thailand, the former businesswoman, who is far from the cliché of a dropout, radically changed her life.While some swear by yoga, others roll their eyes as soon as it is mentioned. While some believe it to be the ultimate happiness-inducing and self-healing miracle, others dismiss it as an over-hyped new age trend. Anna Reschreiter probably belonged to the latter group when her friend invited her to try out a yoga class. That was six years ago. If someone had told her then that she would one day teach Mukha Svanasana – downward dog – and Surya Namaskara – sun salutation – she surly would have been the one rolling her eyes. At the time, the studied business manager lived in Vienna and hurried to work in high heels and a business suit every morning. Her main field: business consulting. Her friend finally convinced her to try out yoga. And that's how it all began.

On self-liberation, eye-openers, and happy feet

What's special about this woman's story? At first she only found a physical approach to yoga: "I noticed how good it felt to work out." In the course of time, she began to feel how practicing yoga benefitted her mental wellbeing: "I calmed down, my concentration improved, and didn't take things to heart as easily." What followed was a series of experiences and decisions that led her to a life that is much more about what she wants and needs than what she had planned. So what is so special about this story? Probably nothing – which is what makes it so remarkable: It is neither the story of rising from the ashes after a burnout or mental breakdown. Nor is it a miraculous transformation à la Eat, Pray, Love. There were no grave health issues, nor a lack of orientation. And yet, everything changed gradually, step by step. Anna realized that in the long run, it made no sense to commute hundreds of kilometres between Vienna and Lech every other week just for work. She realized how liberated she suddenly felt when she stopped squeezing her feet into high heels: "… you force your foot into the shoe, you force your spirit into a certain form, you force yourself to be something else…" She remembered what she had known as a child, but forgotten: "I need nature, it gives me an immense amount of strength." You could say that practicing yoga helped her find herself when she didn't even know that she wasn't fully herself. Maybe things would have turned out the same without yoga – who knows? Surely every yogi would agree, however, that a continuous yoga practice has a positive effect on body and soul.

"Travel often; getting lost will help you find yourself," is one of the 15 affirmations found on the Holstee manifesto, a poster designed by art students from New York that went viral in 2011. Even if Anna didn't feel the pressing need to find herself, she did know how fulfilling travelling can be before becoming a yogini. Her growing love for yoga led her to quit her job in Vienna, pack her backpack, and travel to Nepal for two months, where she experienced her first intensive meditations in a retreat centre. "During our first morning meditation it was still completely dark outside and my feet kept falling asleep. But then I managed to calm down. When it slowly became light outside and the birds started singing, I opened my eyes and everything was peaceful. That was the moment I thought: I have to keep on doing this." Her next trip was to the North of India, "where the Dalai Lama lives": ten days without a phone, without a book, without eye contact or exchanges with others and twelve hours of meditation each day. "It was so tough that many quit and just like everyone else, I was on the verge of quitting." But Anna pulled through. And was richly rewarded: "When I left the centre I sat down beside a rusty chair and a withered bush. I was just sitting there when a bee and a butterfly came by. I watched them fly around and noticed how beautiful they were. Beauty had never been so visible to me until that moment." In 2013 she completed her yoga teacher training with internationally renowned trainer Paul Dallaghan in Thailand. With her certificate she returned to Lech where she now introduces her students to Eastern spirituality and practices.

An ode to Lech

There are yogis who follow their teachers like groupies. They choose a nomadic life, quit their jobs and flats, and get by with odd jobs. "I keep my base and it will stay that way," Anna explains. She not only teaches yoga in Lech, but also runs a bed and breakfast, Pension Gradenburg, with her mother. "I love the deeply rooted, rustic side of Austria; nature, the mountains – I think that all emotions are stronger in the mountains. To me, nature seems larger here, higher and more intense." She considers Lech a power place where yoga could be become a more prominent subject. "People all over the world seek beautiful places to practice yoga." Lech is definitely one of these places, Anna believes. It is a place where people who don't realize that they have lost their way can find themselves in a breathtakingly beautiful setting. Or simply enjoy a great workout.