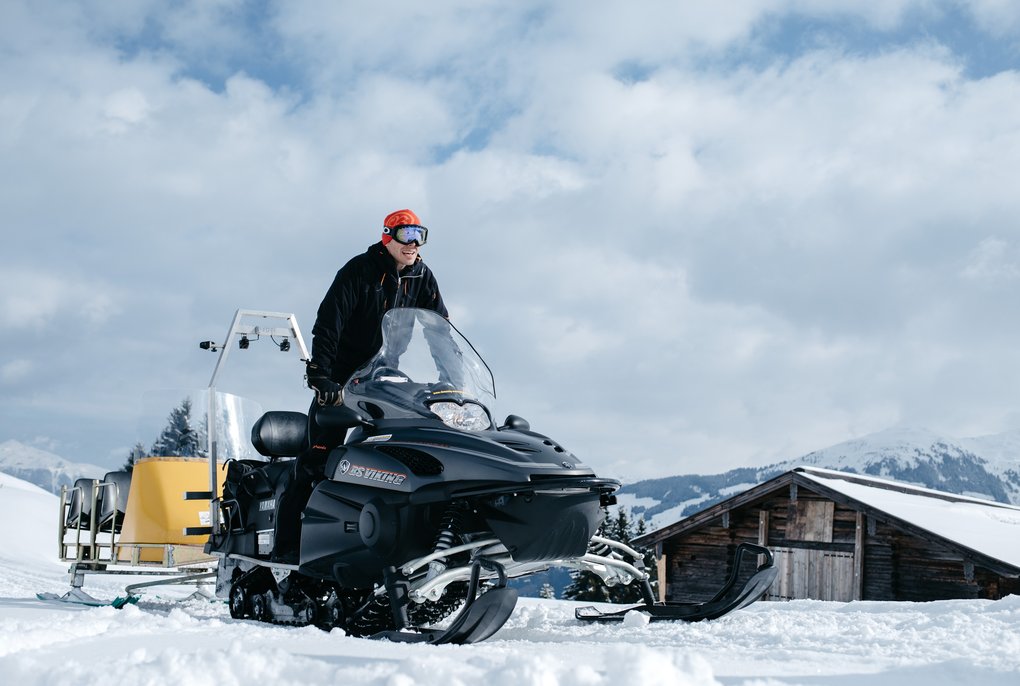 Energetic, yet down to earth: That’s how Oswald Hochfilzer would describe himself – if he had to. But he prefers to leave that to someone else. We’re here to give it a try.

Oswald Hochfilzer stomps into the stable in his work boots. We can see our breath in the crispy air. It is 8.30 am. Oswald has probably been up for more than four hours and has already finished his office work. Following his grandfather's credo to get things done by lunchtime, he is sure that a few productive hours in the early morning produce better results than an entire afternoon. He greets his black Angus cattle with a few hellos heartily bellowed through the entire cowshed. The calves are the first to answer, the older cows follow suit.

Oswald runs his cattle farm together with his father. His animals have a happy life – not only the breeding bull. They have a huge pasture area with more space and food than they could wish for. That's what makes the meat that goes into the traditional goulash served on Bärenbadalm so tender – and it’s why all the snowboarders and skiers love it so much. The large chalet on the Jochberg, at 1870 metres above sea level, has been in Oswald and his family's hands since 2004. The building is made completely out of wood and is surrounded by nothing but the blue sky, clouds and the mountains. From the Bose speakers in the wall we hear the soft voice of chanteuse Charlotte Gainsbourg. Oswald strictly refuses to offer any cheap après-ski thrills, which his guests greatly appreciate. They also revel in the high-end culinary offerings, which are almost all locally produced. Comfortable upholstery inside the chalet and cool Fatboy beanbags on the large wood terrace ensure that everyone can relax properly before heading back to the slopes.

"Too much information, I feel I'm gettin' lost," Charlotte Gainsbourg sings. Most guests hardly hear the music. Posting selfies and snapshots of their snow-filled adventures is clearly their priority. "Watching someone stare into their mobile is like watching a dog bark at a cow, not a peep will get through to them." Oswald is not a fan of facebook & the like. His opinion is best summed up on his website, where his charming, tongue-in-cheek comment on social media is: "Join our social network at 2000 metres". Why the disdain? Maybe it's the information overload. Maybe his aversion points to something deeper, something revealed when we ask Oswald about his core values. He doesn't hesitate and quickly answers: family, home, a sense of connection and tradition – values he wants to pass on to his two sons, 5 and 2. Both love being part of the ongoings on the farm or in the fields. He believes it's important for a mother to stay with her children, to raise them with clear rules instead of a laissez-faire attitude. The most important thing, Oswald explains, is to be normal. "I like normal people and everyone knows exactly what I mean. That's the beauty of it: to be as you are." A network aimed at self-promotion and self-obsessed behaviour couldn't be further from his views.

“I am not a big city kind of person“

Let us take you a bit further down the mountain. At an elevation of 1685 metres Oswald Hochfilzer recently opened his second alp: the Wirts’Hochalm. One could call it the Bärenbadalm’s pretty little sister. It features an exquisite interior design in red and grey, a bathroom with a great panoramic view and a freestanding Agape bathtub designed by Patricia Urquiola. One of the three bedrooms is furnished with a restored bed from the 19th century in which the Austrian Emperor Franz Josef once spent a night. The entire place is filled with the scent of wood – regionally grown, of course. And finally, a sauna with the most amazing panorama view completes this piece of heaven. The walls are decorated with old photographs of Oswald, his father, and his grandfather. When the chalet isn't rented out to well-situated guests, the family likes to enjoy a few days here on their property, their mountain, their estate. Kitzbühel is Oswald’s home. It’s his father’s home and it was his grandfather’s home. Today it is also his children’s and his cattle’s home. “I’m just not that big city kind of a person. If I don’t hear a heartfelt ‘Griaß di!’ (Austrian dialect for “hello!”) in the morning or if I have to spend hours in traffic every day, I go crazy,” the 36-year-old entrepreneur says. When Oswald goes on holiday with his family, “coming home is usually just as wonderful as leaving.” He goes for runs in summertime and ski tours in winter. Without the lively tourism and trade of Kitzbühel, "all this" wouldn't exist - Oswald is well aware of that. And without Kitzbühel, Oswald simply wouldn't be Oswald.

A cattle farm on the one hand and two alps on the other – seems like plenty for most. But in Oswald’s world, it’s not: There is also his crayfish and trout farm, his agricultural farming and his latest project: his own hydroelectric power plant. What used to be a sawmill with water rights is also part of his grandfather’s legacy. And his next big project. In fact, Oswald’s life seems to be a succession of big projects – since he can never choose just one, he simply does them all at a time. When he was young, his projects were sports-related: Oswald played for the national youth golf team, won the Ski & Golf World Championship three times and successfully took part in the Skicross World Cup. Today, his projects are his family’s property and business. And he actually follows a plan: “My goal is to hand down our family’s property in a better condition than it was when I took it over.” And that is one remarkable property. Oswald’s strategy is to create synergies such as using his farm’s produce at his alp and maybe using his new hydroelectric plant to feed them with energy in the future.

Oswald and Kitzbühel are a great match. Both are traditional, yet unconventional, busy, yet so relaxed, down to earth, yet flying so high. Or, to put it really short: Oswald is a man who really knows who he is.