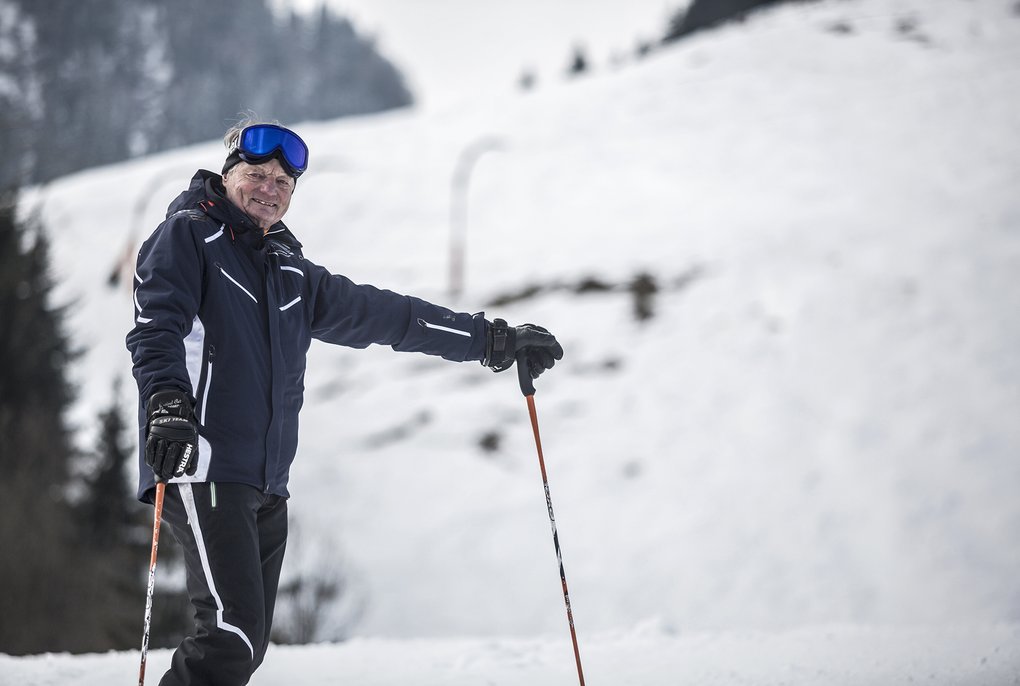 In the 1950s he was a member of the Kitzbühel Wonder Team, a group of six guys from the Tyrolean town who dominated just about every ski race at the time. Skiing with him on the legendary Streif race track, we hear about trees acting as safety nets back in the day - and the unusual reason why racers sometimes really wanted to get down to the valley as fast as possible.

What better place to meet Mathias Leitner than the “Legendencafé” – the legend’s café -in the valley station of the Hahnenkamm cable car. And as if any proof was needed that he is counted among the eponymous legends in this place, the waitress hugs and dismisses him with a laugh and “That’s on the house, Hias!” as we ask for the bill before setting off shortly after. Walking over to the gondola we see that this guy does not move like a 81-year-old; even stepping up the stairs in ski boots looks effortless. But let’s come back to that later.

“We won just about everything”

Born in 1935, Leitner was part of the legendary 1950s Kitzbühel Wonder. “We won just about everything back then,” he remembers before reflecting for a moment and revising his statement, “Well, of course not everything. But a lot.” We, that means himself and his teammates Toni Sailer, Anderl Molterer, Ernst Hinterseer, Christian Pravda and Fritz Huber. They all hail from Kitzbühel, and there was no generation like theirs before or after. “Of course it was mostly Toni and Anderl who won the races,” Leitner recounts, “but when they weren’t winning there was the rest of us, ready to jump in.” And sure enough he himself won, too: the Arlberg-Kandahar slaloms in Sestriere, for example, and races in Wengen or Madonna di Campiglio. In 1960, he made Olympic slalom silver, coming in second after Ernst Hinterseer.

As we enter the Hahnenkamm gondola – the world’s first cable car built specifically for skiing – there’s another reaction that shows the respect and appreciation people in Kitzbühel still have for Mathias Leitner. “Of course! Anything Hias wants,” we hear after asking if we could have a 6-person gondola all to ourselves to take some pictures. Talking about pictures. “Up in the mountain station there’s a great picture of all of us, taken back in 1953. And a new one too,” he adds, correcting himself once again, “Well, new is a relative term. It was taken in 1980.”

“When you needed the bathroom you had to get to the valley as fast as you could.”

Sports legends are held in high esteem in Kitzbühel, and not only the local ones. Every winner of a Kitzbühel race gets his name printed on a gondola. There is, however, no “Hias Leitner” gondola. First, this tradition was established only after the new construction of the cable car in 1996, and second, Leitner never won a race in his hometown. But he has no bitter feelings; there simply was always someone faster than him, he shrugs. He made it to the podium twice in the alpine combination, however, and came in fourth in the downhill race. And sometimes he had a particularly curious motivation to get down fast, he says, laughing, “Back in our days there was no starter’s hut, no infrastructure in the starting area whatsoever. We stood up there, unsheltered, in any wind and weather, and if you needed to go to the bathroom all you could do is get down to the valley as fast as you could.” Gesticulating vividly, Leitner recounts such anecdotes, remembering them in great detail.

A lot has changed since those days. “The steep section of the track has always been that steep of course, but it was also much more narrow. Racing down you came very close to the trees, and there were no safety nets. The trees’ branches dangled almost all the way down to the ground; they were our safety net if we fell. Or we just rolled down between the tress.”

After ending his active racing career, Leitner worked as a trainer with the Tyrolean and the Austrian Ski Federation until 1999. In this time, he helped several young talents turn into superstars – think Leonhard Stock, Benjamin Raich or Mario Matt – who have won a total of 23 Olympic or World Cup medals. All of them have ended their careers by now, but Mathias Leitner still follows all the races. At the moment, he very much likes the Norwegian team, he says, one reason being that they are making no excuses when a race didn’t go well for them. “I always told my boys, ‘Stop whining and prepare for the conditions that await you today. That’s how you get ahead of all of those who are still busy whining.’”

His love for skiing has shaped the course of Leitner’s life, and still does today. “When the weather is nice I go skiing pretty much every day. I like to catch the first gondola in the morning.” And as mentioned above, we are deeply impressed by the 81-year-old’s level of fitness. Having adjusted to today’s carving technique easily (“I liked it from the very beginning. All you have to do is lean in a little and off you go!”), he still cuts a very elegant figure as he skis down the infamous – and very steep - Streif slope. Being asked if he would mind showing off his best racing squat for our photographer one more time, he laughs, “Sure! Squatting the Streif? Still a walk in the park!”