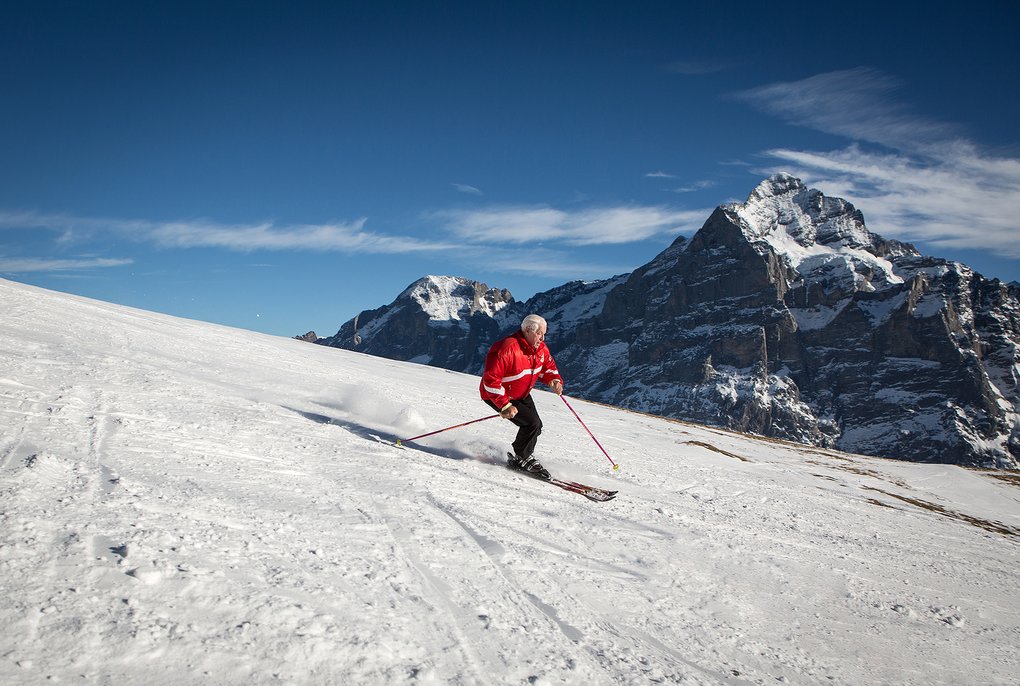 Walter Inäbnit is wearing one of his old red-and-white ski jackets, the official uniform of ski instructors in Grindelwald. “This makes you look even more beautiful!” says a lady who also happens to be in the sports store where we meet him to talk about the 60 colourful years of his life. He will talk about the 1950s, when he jumped every ski jump in Switzerland. About the 1969 shooting of a James Bond movie in which he jumped over crevasses as a stuntman. He will tell us about the many pretty girls on set, lament the fast pace of life today for a moment and then return to expressing his love for the mountains, for Jungfrau, Eiger and Mönch. But first, Walter Inäbnit wants a cup of coffee.

Impressions from the past

Walter Inäbnit is a fixture in this town, “dating back to 31,” he says, meaning that he is 85 years old. He knows every hill and every pass and every saddle around here, every story worth being told. He remembers the day 75 years ago when Hotel Bär in the heart of Grindelwald (on what is called Bärplatz square today) burned down. “I was standing at the window, ten years old, and watched it burn. They say a cigarette lit it but there never was final proof for that.”

In his early twenties, Walter Inäbnit trained to become a ski instructor and a mountain guide. “Then they invited me from all over Switzerland to come ski jumping. I was quite good at that, if I may say to myself,” he remembers. Three times he also participated in the famous Lauberhorn ski races, taking place for the 86th time this year, where he “didn’t come in last but also not first.” He was a hard worker, had ambitions, didn’t mind working on a Sunday. Many of his guests came to ski with him for many years, even decades. “With one guest I skied every single winter for 29 years.”  The ski school he worked for had only small offices, but “it made enough money and everyone was happy, even though we were also very competitive,“ he says and laughs.

Only very few people had the privilege to watch on very closely when in 1968 and 1969, the Schilthorn mountain, at 2,970 metres the highest peak of the Bernese Alps, became the set of “On Her Majesty’s Secret Service”, the latest instalment of the James Bond series, starring, for the only time, George Lazenby. The actor, an Australian, “couldn’t ski and so they brought in German combined champion Luggi Leitner as his double,” Walter Inäbnit remembers. A dear friend of his was the head of all the skiers who were involved in the filming, and so Walter Inäbnit was hired as a stuntman and grip. “The shooting took all winter, five and a half months. We skied through mountains, jumped over crevasses, with the crew filming from below. And of course we helped wherever we were needed, with carrying and setting up stuff.” Since there was not enough snow on the Schilthorn that winter to film the wild chase scenes, the crew moved to the Mutthornhütte hut for a few weeks. “We worked from Sunday to Friday and had Saturday off. Me and two other guys always went home for that day while the others stayed in Mürren and spent their money on drinks. In spring, they had less money than when they started out in the fall,” he remembers. And laughs.

The film crew clearly left its mark on Mürren. Practically over night, about 180 of them descended on the village, a community of about 500 people at the time, and stayed for half a year. They left behind a lot of excitement and a new church tower, built to create the perfect impression of a Swiss mountain village for the movie. And the revolving restaurant up on the Schilthorn, rotating around its own axis every 45 minutes, also built solely for the film. Guests are served a James Bond Champagne Breakfast special or Bratwurst with onion sauce while they marvel at the over 200 summits in sight. Since 2013 there is also an exhibition on the film and a “007 Walk of Fame”. So today, the Schilthornbahn, which had transported the crew back in the day (“All the pretty girls from the shoot were always in it.”), takes tourists and James Bond fans up the mountain. And sometimes perhaps also Walter Inäbnit. He has all the time in the world.

Up until two years ago, he had worked as a ski instructor. Today, he only hits the slopes when the sun is out. “I ski a lot more relaxed today, sit down if I feel like it, maybe go for a beer in between.” He doesn’t understand why everything has to go so fast today. “Back in the day we spent a lot more time on the beginners’ hill. Now they want to take beginners up to Kleine Scheidegg already on day 2 although they still know nothing about skiing. That’s wrong! It’s too fast, too early,” says Walter Inäbnit. Although he no longer works as a skiing teacher, he still exudes that certain charming sense of authority. And after six decades in the business, it’s what he knows best. Just like the mountains of Grindelwald. “I just love Grindelwald. I have always been here and wouldn’t want to have it any other way,” he says. Before ordering another cup of coffee.