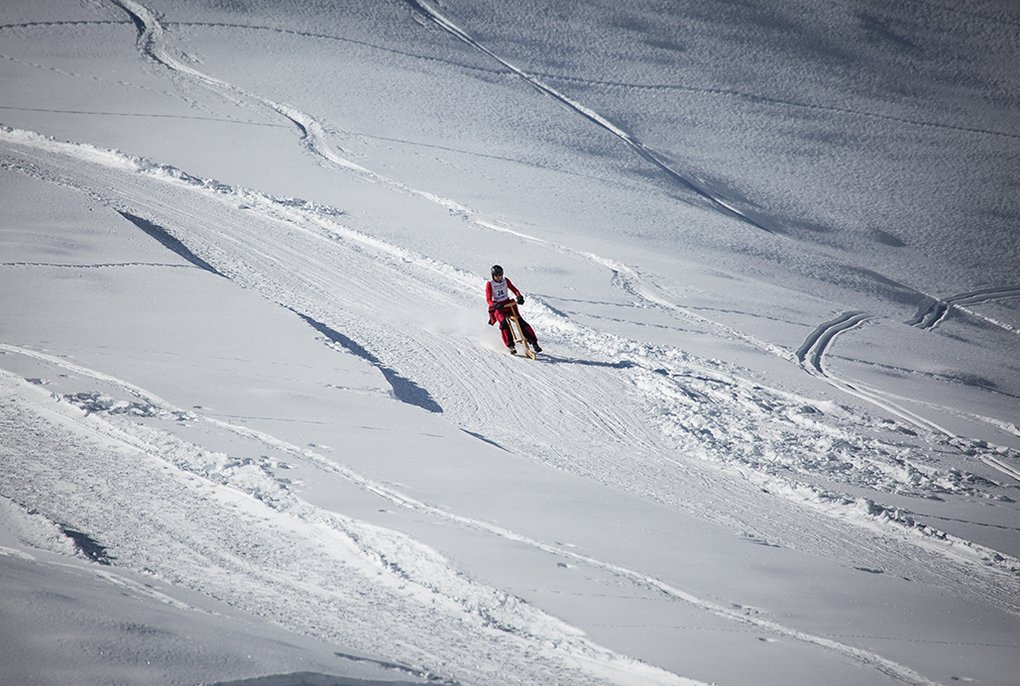 World Championship. That sounds serious. Big, important, professional. There’s a lot at stake. The athletes have trained hard, come a long way. And then it’s time. They focus one more time. Double-check every little detail. And off they go. Now there’s only winning or losing. Well, everyone who has ever been to the Velogemel World Cup in Grindelwald knows that a world championship can also have a different vibe. When people compete on their bike-sledges in the Swiss town, everything is more lighthearted, fun and relaxed.

Daniel Bleuer wears a T-shirt, sunglasses, all in black. We meet him behind the Bussalp mountain hut where he has parked five Velogemel – three big ones and two small ones, to be precise – upside down in the snow. The newly waxed runners of the curious wooden bikes without wheels reflect the sunshine. January 29 at 2,000 metres above sea level, and the sun is so powerful you could walk around in your underwear. Daniel Bleuer has been participating in the Velogemel World Cup for many years. It is the 22nd time this event is taking place, and this year, his whole family is here to compete: Daniel, his wife Jeanette and their three children. Noa, the youngest son, says he’s not in the mood to do the race today. In the end, however, he will.

First and foremost, the Velogemel World Championship is about having a good time, and everyone is invited to participate. Some come just for the fun of it while others are really ambitious about it. For Daniel Bleuer, this is a real race, a real competition. Unfortunately, he couldn’t train much this year. “I rode only twice in the last 14 days,” he says, “there was not enough snow for more.” At last year’s race, he came in second, and he has his eyes set on a place on the podium again this year. His “steerable sport sled with in-line runners“, as the Velogemel is described officially, and those of his family are in perfect condition. “The most important part are the runners. Originally, they used pork rinds to grease them.” Today, Daniel Bleuer uses a special wax for the metallic parts of his snowbike.

It’s shortly after 11 am. The participants start to show up,  Velogemel fans of all ages and backgrounds. They all have walked up here for about 45 minutes in the sunshine, many haven taken off their jackets, hats and gloves on the way.  There are Velogemels all over the place, they are all identical except for the writing that has been burnt or carved into them. Not everyone owns their own Velogemel, some have also rented one just for the event.

Riding a Velogemel is not hard.

What makes it interesting is that it is easier to manoeuver than a sledge, and you get better at it and faster with time. “It takes a combination of skill and courage,” says Daniel Bleuer. “When I tried it for the first time, about seven years ago, I crashed and landed in hospital with my belly all bruised. But I was back to ride the next year. It’s just so much fun to do it as a family.” Now it’s almost noon and everybody is getting ready for the start. We take a quick picture before we have to go back to the valley to watch the event unfold.

We are waiting at the most tricky curve shortly before the finish line when the first racer sets off from Bussalm. It’s a good spot to watch them come down the snowy hill in 30-second intervals. It’s not as easy breezy and relaxed as we had imagined it, in fact, these courageous men and women on their wooden snowbikes come down at breakneck speed. Luckily, about an hour later, all members of the Bleuer family have arrived safely.

This year, Daniel Bleuer didn’t make it to the podium; he came in fourth lagging behind 0.83 seconds. But the rest of the family has done well: In the women’s downhill race, daughter Joelle and his wife come in first and third, respectively, and so did his sons Nils and Noa in the juniors’ race. Sure, the Velogemel World Championship might seem like a fun event, but still being on the podium does feel good. And, after all, it is an event that celebrates a hundred-year-old tradition: Ever since 1911, the wooden bikes are made exclusively in Grindelwald.