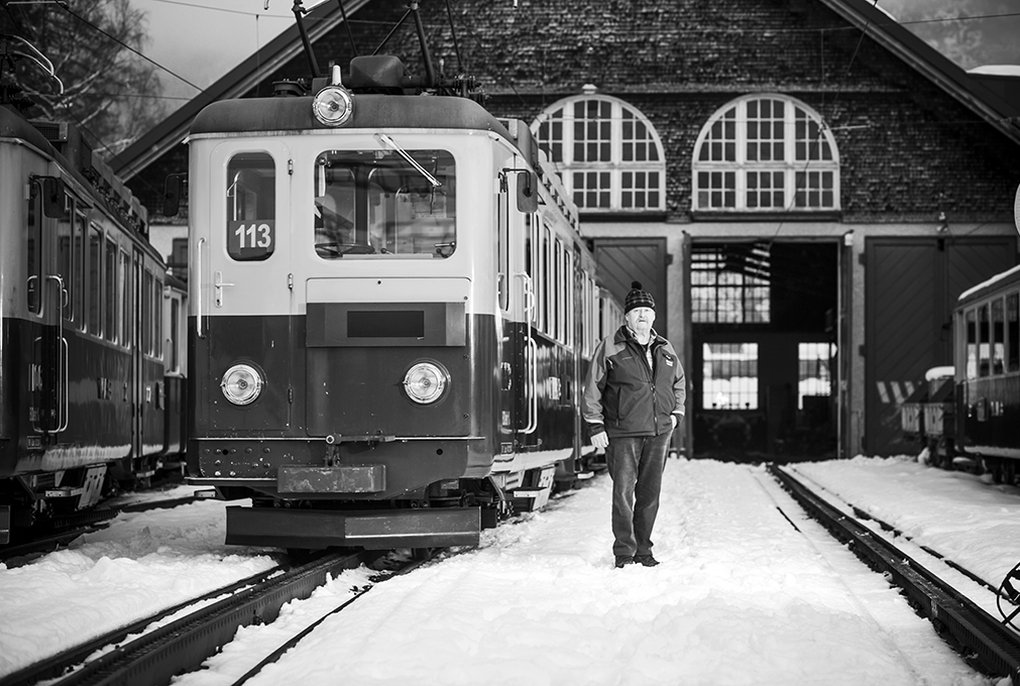 Grindelwald Station. In just a few minutes the Wengernalpbahn train will pull out of the station. Only after honking properly of course. On the 25-minute ride up to the Kleine Scheidegg mountain pass, the epitome of a Swiss winter wonderland, first-time passengers will look out of the window more often than the regulars. And most of them will be so impressed by the view that they will even forget to pull out their smartphones, forgoing taking pictures to just marvel at the panorama, including the Eiger North Face.

Everyone who has seen the world famous rock face up close knows exactly why hundreds of thousands of people from all corners of the world flock to this place every year. When you get off the train up at Kleine Scheidegg at 2,061 metres above sea level you know you are experiencing a very special moment. The air is incredibly crisp, the view of all the summits and untouched snowy hills around you just so breathtaking that all the stresses and worries just seem to vanish. Yet there’s more to come. At Kleine Scheidegg the Jungfraubahn, the world’s oldest rack railway, is waiting to take passengers even further up to the Jungfraujoch saddle at 3,454 metres.

Foreman Peter Roth knows every single train, every waggon, every rack-wheel as if he was married to them. And in a way he almost is. For more than 40 years he has been close to the railway. In the beginning, he worked as an engine driver, sitting up front in the driver’s cab. “Back then we stayed up on the pass all week. It was like we were ship’s boys,” he remembers. On its way up to Jungfraujoch, the Jungfraubahn masters 1,393 metres of difference in height. As a driver, you go up and down the mountain three times a day. “That’s almost 9,000 metres of altitude difference per day. It does make you a little dizzy in the head,” the 61-year-old says, laughingly.

“Last year, we took over a million passengers up to Jungfraujoch.”

The rack railway has been in service for over a hundred years, since 1880 to be exact. And ever since, people have loved it. “Last year, we took over a million passengers up to Jungfraujoch,” says Peter Roth. In 1991, he decided he did not want to stay an engine driver forever and started working in the technical department. “I have always loved tinkering with things,” he explains. Of course, being the foreman he is today requires a lot more than a knack for tinkering. He looks for ways to optimise the workflow and cure the little aches and pains of racks and locomotives. He gets the two apprentices excited about polymechanics and draws up shift schedules for the 80 workers. He organises the trains and acts as the contact person for authorities. “It’s a huge field and no day is like the other. And we’re always up in the mountains, out in nature. When I get up at 6 in the morning and put my feet on the ground, looking forward to the day ahead of me as I get dressed – well, then something’s got to be right about this, right?” Peter Roth says. Never in his life has he applied for a job. “The Jungfraubahn people approached me after I finished military service. And ever since I have been here.”

“When there’s fresh snow that baffles all the noise you feel like you’re riding through cotton wool.”

Occasionally, when someone’s on sick leave or when he wants to try something out, Peter Roth still sits in the locomotive’s driver’s cabin. “I will never forget the incredible changes of light in October when you ride up again after lunch. The shadows thrown by the sycamore trees, all these beautiful forests. Or those April days when the arctic violets start blooming and you can see the marmots coming out for the first time after a long winter.” His absolute favourite time, however, is the period between Christmas and New Year’s, when Grindelwald is abuzz and everything is illuminated. “When there’s fresh snow that baffles all the noise you feel like you’re riding through cotton wool.  And then I look down on Grindelwald from the intermediate station, on that sea of lights, and I feel like an airplane pilot flying over the skyline of Grindelwald. We like to switch off the lights in the passenger cabins on those days and ride in the dark. That always feels very special,” Peter Roth remembers.

“It was then that I realised how strong we are in exceptional circumstances.”

There were more turbulent times as well. On November 11, 1996 – the foreman remembers the date exactly – a heavy storm hit Grindelwald, knocking over a 45-ton composition (several carriages connected to each other) with 90 passengers. Fortunately, everyone could be brought to safety. “But then I stood up there in the storm for half an hour, asking myself how to get that thing back on track. There was no way that day to bring in a crane. But we all joined forces and made it happen, at least a few days later when we could access the place with cranes again. It was then that I realised how strong we are in exceptional circumstances. In all my 40 years here that has always fascinated me.”

“I am convinced this thing has a soul.”

When you work with something so closely and over such a long time, you probably can’t help but build some kind of relationship with it. “I am convinced this thing has a soul. Why, you ask? Well, because it’s humans that make it – engineers who design it, mechanics who build it and other people who drive it,” explains Peter Roth. He has also taken a great interest in radiesthesia, the theory looking into the effect of radiation on the human body by means of pendulums, rods and other devices, something he plans to focus entirely in his retirement. It’s nothing esoteric for him, the technician. And sometimes he will still ride the train up to Kleine Scheidegg or further on to the Jungfraujoch, looking forward to being touched by the familiar magic again on his way down.