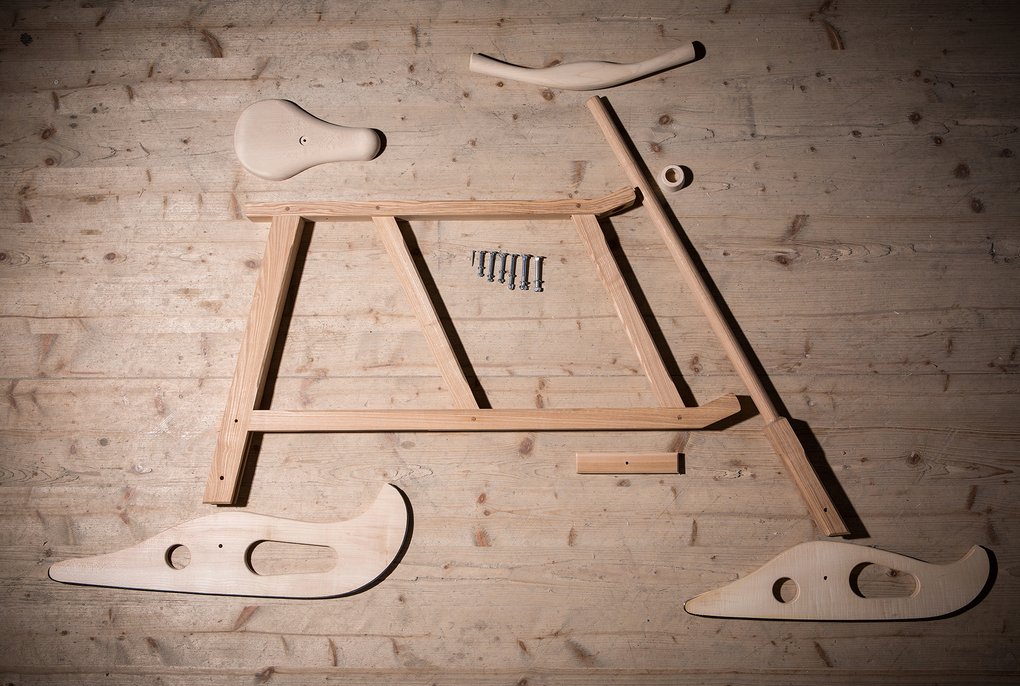 Markus Almer knows that the natural light in the workshop will not be sufficient for our photographer. Obviously, we are not the first to come here for an interview with the Velogemel project manager. “We had seven such requests last year,” he says. Lately there has been an increasing interest in the Velogemel, a wooden bike on runners, its name deriving from the Swiss words for bike – velo – and sledge – gemel, although the “steerable sport sled with in-line runners“, as its inventor Christian Bühlmann called it initially, has been around for more than 100 years. Maybe in the age of artificial intelligence, nanotechnology and self-driving cars we also long for the simple things?

The workshop does not look quite like you might have imagined. It’s a big hall with a lot of very modern-looking machines that cut, saw and hammer away. The company, Holzkreation Schmid (successor of Rubi Holzbau, the enterprise that made the Velogemels up until 1994), produces a lot more than just Velogemels: windows, furniture, kitchens and everything else that can be made from wood. Markus Almer is in charge of the Velogemel production. “We sold 32 in 2016,” he says.

Necessity is the mother of invention

Markus Almer is not really into being photographed. Still you realise quickly that he has done this before: Posing in the Velogemel corner in the upper floor of the production hall. On a big workbench we can see all the different parts of a Velogemel. There are only a few, the construction is simple. Looking at the first prototypes, we can see that not much has changed since the sledge-bike’s first days. It was born out of a necessity and not by some hobbyist tinkering away in his workshop.
Its inventor, carpenter Christian Bühlmann, had trouble walking after suffering from polio as a child. He could, however, ride a bike, and when he was looking for a means of transportation for the winter months, he came up with the idea of a wooden bike on runners, pushed along by his feet in a sitting position. The idea caught on, and not only among people with walking disabilities.

Today, the Velogemel is primarily a fun tool.

There are several “Schlittelpisten” (slopes for sledging) in Grindelwald where you can go on your snowbike for miles. “A Velogemel is standard equipment for anyone from Grindelwald,” says Markus Almer, who likes to ride his’ as well. “My favourite route is from the Faulhorn mountain down to the valley. It’s Switzerland longest sledge run, covering 1,000 metres in altitude.” Almer already knew the Velogemel as a child, but only when he was trained to be a carpenter, he learned about its anatomy, the different parts made from Swiss ash and maple wood, about the masterful skill of cutting and honing and gluing them. Today, two of his people, Hans and Beat, take care of all these things.

There are currently two models available – one for children, one for grown-ups. “We are phasing out the children’s model,” explains Markus Almer, “because it’s only a short period in which children are too small for a regular model and it’s mostly the regular Velogemels that are handed down from generation to generation.” The Velogemels all look exactly the same except for the writing that is being carved or burnt into the frame. Most often it’s the owner’s name or a special designation like Papamobil or Grandpa’s Harley. “Velogemels are often bought as gifts,” says Almer. Most clients are from within Switzerland, but “we’ve also sent Velogemels to the States or Norway.” Some hang theirs on the wall as a souvenir.

A gift that keeps on giving – all your life and even longer.

In contrast to many consumer articles today, a Velogemel is built to last. “If you take good care of a Velogemel it will last for a hundred years,” the carpenter says. Taking care in this case means leaving the Velogemel in a warm room to dry when it has become wet and waxing its runners regularly to prevent oxidisation. “And ride it carefully,” Almer adds. Sometimes, battered rental Velogemels end up in his workshop. “When I see those I don’t even want to know what happened to the one using it.”

Sure, the Velogemel production makes up for only a small part of his business, but it’s something that Almer finds all worthwhile. “The Velogemel is an important part of this place, of our identity as Grindelwald people. Whenever we receive an order for a Velogemel, I at least try to make time for assembling it myself. Being stuck behind the computer isn’t for me anyway,” the carpenter says. What makes it all so special for him? “Producing something unique, something exclusive to this place. That’s just beautiful.”