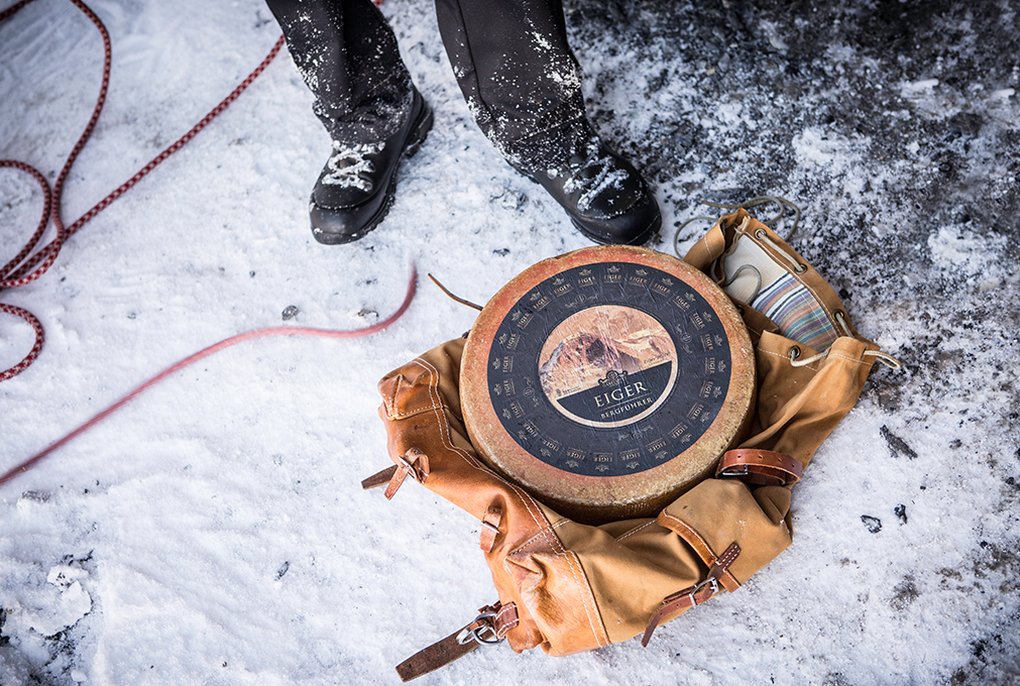 Performing a naming ritual for cheese is fairly unusual. Taking the ceremony up to the Eiger north face seems downright absurd. And yet it all makes sense in the end. The cheese in question is not only a signature product of local cheesemaking, it is also dedicated to Grindelwald's most successful mountain guide, Christian Almer.

On August 11, 1858 Charles Barrington was the first person to successfully reach the Eiger's summit, along with local mountain guides Peter Bohren and Christian Almer. The former, a short man of no more than 1,50 metres (just below five feet), was jokingly known as "Peterli der Gletscherwolf"(little Peter the glacier wolf), while the latter was and remains Grindelwald's most successful mountain guide: Christian Almer had a record number of 45 first ascents under his belt. In his honour, cheesemaker Johann Wittwer created a new cheese, the Eiger Bergführer Chäs, (which translates into Eiger mountain guide cheese). What better place to officially name the cheese than the mountain it is named after? Exactly 158 years after the first ascent, Christian Almer's great grandson, Albert Almer, awaits his guests with a wheel of cheese at Stollenloch 3.8. – a tunnel entrance in the middle of the Eiger north face. On this special occasion, The Jungfrau railway has made a rare exceptional stop midway, allowing the guests to climb directly into the north face. This is much cause for excitement and a bit of delay for the ceremony.

Naming a product in an elaborate ceremony naturally calls for a proud brand ambassador. Bernhard Kallen, passionate cook and winner of the Swiss cooking show "Männerküche", knows what he's talking about when it comes to good taste. Just how much he adores the cheese is clear from the first to the last sentence of his speech (which could easily pass as a declaration of undying love): "It is not only cheese, but rather the true essence of lush mountain pastures, the best nature has to offer, paired with the refined art of cheesemaking."

Eiger Bergführer Chäs is more than a local delicacy. It embodies the successful interplay between farming, tourism and trade. The Eiger, and its north face in particular, has attracted guests from all over the world for centuries. Cheesemaking can look back on an equally rich history. The Eiger Bergführer Chäs, made of alpine milk from Grindelwald, unites these two traditions. It is a delicacy that perfectly exemplifies the manifold value of locally sourced and produced food. Eigermilch AG, a plc formed in 2011 and owned by regional dairy farmers, produces cheese and other dairy products locally and then distributes to communal tourist businesses and specialist shops.

Enjoying a piece of home

"Great things are done where man and mountain meet; this is not done by jostling on the street." William Blake's words form the opening sentence of Bernhard Kallen's speech. Perhaps it is a matter of opinion what constitutes a 'great thing', but in regard to cheese, Johann Wittwer has undoubtedly achieved greatness with the Eiger Bergführer Chäs. He takes care of the cheese for six months, then it spends another six months ripening in a rock cellar. In these twelve months, the cheese develops its distinct, full-bodied flavour, which not only charms spokesman Kallen's taste buds! He surely knows how to describe the exquisite taste of Eiger Bergführer Chäs: "I remember exactly the first time I tried a little piece of this beauty. I felt its zesty, flavourful power on my tongue, my palate began to cheer and my stomach screamed for more. More of this scrumptiousness, this explosion of flavours, this delicious piece of home!"