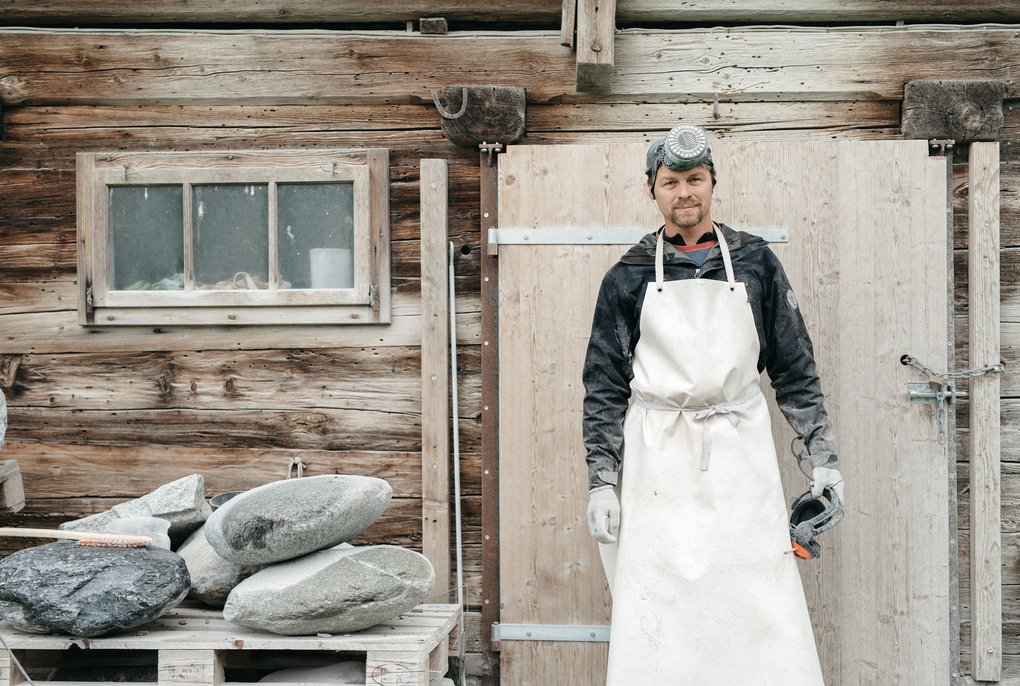 “I’d like to learn to write”, says Beat Hofer. Wearing a white apron, safety goggles and a dust mask, he’s making a fountain out of a huge stone and just starting to cut out the basin. Prior to this, he worked on the stone with a special chainsaw – Hofer is a stone artist. Besides fountains he also makes washbasins, fruit bowls and candlesticks. He is, of course, able to write. What he wants to perfect are his inscriptions. “You have to get the writing to look just right.” Those who know Hofer know that he will carry on improving. After all, his other skills are also self-taught.

The appeal of the unknown

While building his own house, he came up with the idea of making a stone fountain for the garden – why not make a washbasin for the bathroom at the same time? “I had never worked with stone before.  Doing something you don’t know anything about is a real challenge,” explains Hofer. “So I got stuck into it and somehow the material fascinated me, it’s very versatile.” Versatile is certainly an appropriate word here, as Hofer’s work as a stone artist is his fourth area of work. Anyone with an eye for detail can soon spot references to the other three.

The upper arm of his coat features the logo of grindelwaldSPORTS, while the rear window of his jeep reads Eigervision – Hofer is also a mountain guide and co-owner of an outdoor event agency. The only profession which he studied after school and for which there is no evidence is his work as a forest warden, which he starts again in a few weeks’ time. Some would see the idea of working four jobs as a nightmare. Hofer paints a completely different picture. Not at all stressed, he acts as though it were the most normal thing in the world. He enjoys the variety. “After spending a few weeks on tour, I really look forward to working on stone or in the woods, where I can be alone.”

Nature is too beautiful to work inside

It isn’t difficult to work out the common denominator in these four areas of work: nature. “I do a bit of office work at the agency, but after 2-3 hours I’ve had enough”, he laughs. As the son of a mountain guide, Hofer was often surrounded by nature as a child, however it wasn’t until later that he consciously recognised the beauty of the region around Grindelwald. “I don’t think that you’re as aware as a child. I just enjoyed being outside.” Nothing has changed since, however he now knows that a location like that of Grindelwald is by no means common. “We need to appreciate our environment – and protect it.”

In his work as a stone artist, Hofer often comes across rivers and streams whilst on his search for stone. He knows the area and he knows exactly what to find and where to find it. His customers only usually specify the dimensions and type of stone and leave the rest up to him. You can never accurately predict what the finished work will look like: “In the beginning, there is just an idea. Everything else develops as I’m working.” So would he enjoy spending more time on other artistic work besides those items he makes every day? Does he sometimes consider letting go of one of his other activities? “Yes, sure.” But? “I don’t really want to give up any of them.”