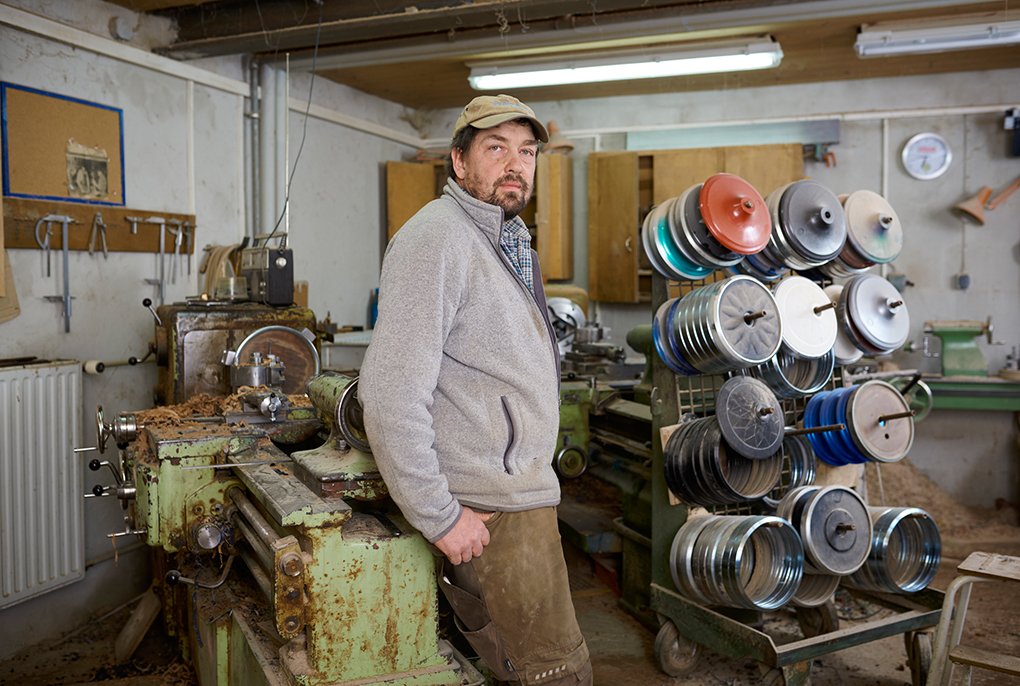 "When Staffelsee freezes, which happens about once in five years, and the state official confirms that the ice fulfils the required thickness of 15cm, then the action starts around here, " Josef Sedlmaier explains. Everyone takes part in the village championships, from the fire department to the shooting club and of course, the children. It's high season for Josef Sedlmaier, because everyone wants one of his ice stocks.
He took over the family workshop from his uncle Hans Sedlmaier, who founded the business in 1960 with his wife Helga. The lady of the house has clearly raised the bar for women in ice stock sports. She was active in the national league for ten years and continues to compete in upper league tournaments.

So it was quite an honour for nephew Josef to succeed his aunt and uncle. After all, Eisstock Sedlmaier is an institution, not only in Garmisch-Partenkirchen, but all over the world. In Germany there are only four ice stock producers, worldwide there are eight. Being one of them comes with a lot of prestige within the tight community of this traditional sport. Thus, an ice stock from Sedlmaier's workshop bears nearly as much tradition as the sport itself: The local club can proudly look back on a rich tradition of 75 years.

You will only know how difficult it is to play if you try it yourself. The trick is to aim at the target stock, known as "Daube", that is positioned at the front of the ice track. If you have a good eye you will hit it, says Hans Sedlmaier. Of course technique is the most important thing. Players train it to perfection all winter long.
Artistic skill is required for Sedlmaiers' craft, because clubs and aficionados want their stocks to boast special crests or decorative elements.

"We used to make wooden stocks from pear or ash wood. The player's initials were stuck onto the wood. Of course the wood stocks would always break at some point," Hans Sedlmaier, also an enthusiastic ice stock sportsman, remembers the early days of his career. In 1962, the trained wainwright began crafting wooden ice stocks as a side project, the rings came from the neighbourhood blacksmith. What was once Sedlmaier's one man enterprise has become an official partner of the International Federation Icestocksport. The equipment is produced in accordance with international tournament regulations, which means that the ice stocks have a standard weight of 5 kg. Each stock has a rubber running surface, a main body known as "Haube", a handle, and a grip.

"It's all about having a good time"

An ice track on the frozen lake makes the tournament particularly appealing because natural ice is always different and the stock may have some hang-ups here and there. A game of this kind requires skill and boosts the fun factor. In the end it's all about having a good time, and sometimes about winning a Bavarian hard-cured sausage. Even the best-established team may lose their nerves and quarrel after a missed hit. "In team sports all team members need to get along well, but a bit of quarrelling is just part of the fun," Hans Sedlmaier laughs.

In earlier times, the game was played at picturesque Pflegersee or Riessersee. The latter is known as the birthplace of Bavarian ice sports and is home to the Garmisch ice hockey club SC Riessersee. Official ice stock sport tournaments, however, follow strict rules and regulations. "Everything is done with precision, teams wear matching anoraks, only one person is allowed up front when shooting, and there is no talking allowed," Josef Sedlmaier explains. And what else do you need to look good on the ice? "Good shoes (he means professional ice stock sport shoes), because you need a secure standing to aim well." Gloves are not allowed following an unwritten law. After all, ice stock sport is a winter sport. And that includes cold fingers and a steaming cup of mulled wine later on.