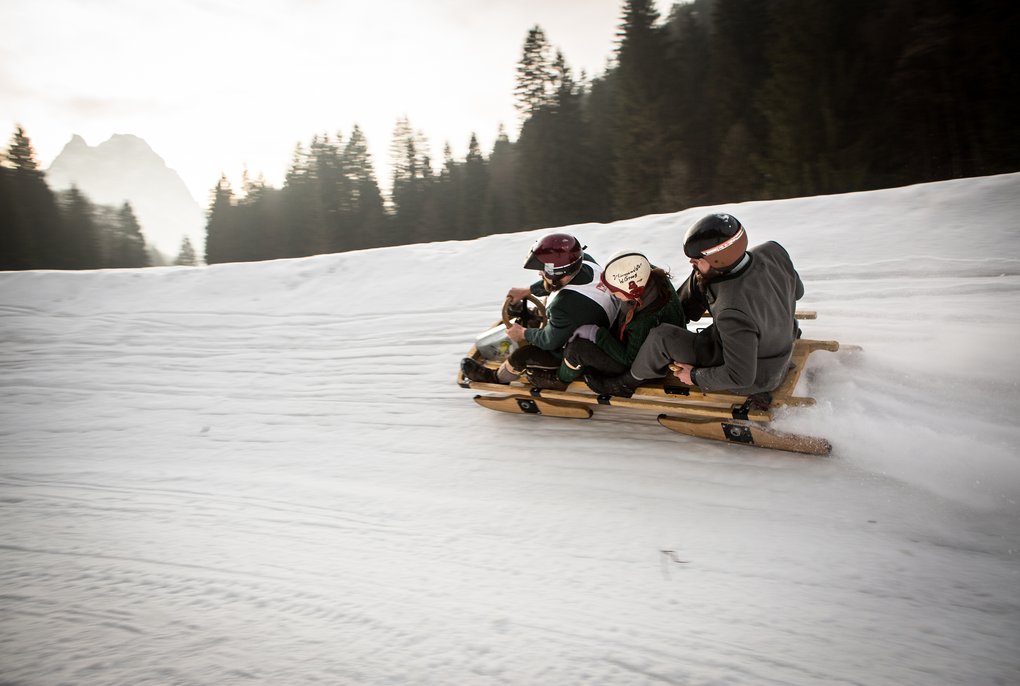 In February 1910 the first bobsleds barrelled down the natural run at Riessersee. What a few crazy Brits had started in the Swiss Alps quickly caught on in neighbouring Germany: Young men with self-made steel constructions racing down hills at exhilarating speed.

Rolf Lehmann was one of these men. He began sixty years later, but was just as fast and furious. Today Lehmann is head of the bobsleigh chapter of SC Riessersee, and the one responsible for the bob sled revival in Garmisch-Partenkirchen.

"We had the idea as early as 2007, but a year later the economic crisis cut our dreams short when many sponsors turned away," Rolf Lehmann describes early efforts to revive the old Olympic run at Riessersee. A few years later, in 2013, his plans finally came to fruition. 46 years after the last tournament – a European Championship for 2-man bobs – someone dared to go down the track. It was none other than Lehmann who wanted to be the first to take a test run. "After all, we had to try it out ourselves before allowing someone else to go." But before this test run could happen, there was a lot of preparation work to be done for the team of volunteers.

In autumn 2012, members of SC Riessersee's bobsleigh chapter began furbishing the lower section of the natural run with wood banking. After lots of snow had fallen in December, they began preparing the track. "First you need to get the snow dense enough to be iced," Lehmann explains. The snow must be pressed: A machine can be used for the flat parts, but it must be done laboriously by hand in the curves. "If the snow isn't packed enough, you can water it as much as you like; the liquid will just seep through and never turn into ice." The fast curves were re-built to up to 2,5 metres with wood planking and ice. "And then temperatures rose and the whole thing thawed. Suddenly the famous Bayern-curve was one and a half metres lower than before. All our work had literally melted away and we had to start over." Rolf Lehmann tells the story without the slightest hint of anger. Quite to the contrary, his eyes light up as he remembers. He is not the type to give up, he says of himself.

From track and field to the ice track

Lehmann's passion for bobsleighing was first stoked 19 years ago. At the time, he was an active track and field athlete and the bobsled association was looking to attract new members. "After the Olympic Games in Sapporo 1972, a lot of sled crews had quit, so they asked me if I'd like to give it a try." Rolf Lehmann agreed and, at the first go, brought home the title of Junior Champion in a 2-man competition. Later he also joined a 4-man crew – first as a pusher and then as a pilot. "I always kept badgering our pilot, so he said I should just do the driving myself," the athlete laughs.

In all the following years, Lehmann never lost his passion for the sport. And so he was thrilled when the hard work finally paid off on February 16, 2013. Thirteen 3-man crews in historical racing garb and sleighs crafted exclusively for the event thundered down the 1000 metre track, mastering the Killian-looping, the Bayern-curve and the final See-curve. Another historical run took place the following year; in February 2015, the Red Bull Bob Heroes held their event at Riessersee, with more than 2500 spectators watching participants compete for the fastest run in crazy self-made bobs.

Due to the tremendous effort it takes to prepare and maintain the track, the SC Riessersee decided to host races only every two years. They already have a plan for 2021, when the SCR celebrates its 100th anniversary: "We want everybody to come. Whoever wants to can try bobsleighing! It doesn't matter whether you have any experience or not," Lehmann says. The club will provide the narrow bobsleds. Each 3-man crew has to complete two training runs without crashing to qualify for the competition. "In the race they'll all wipe out anyway," Lehmann laughs and is obviously pleased that the old bobsleigh run can still make young athletes loose their cool.

The photos were taken at the Historical Bob Race in February 2017.