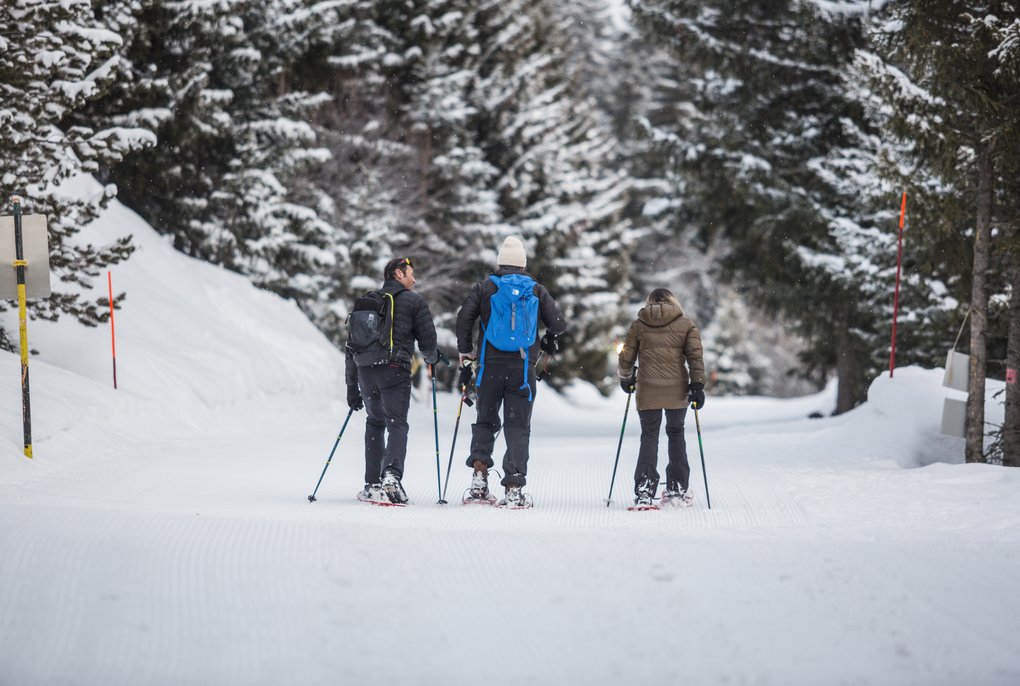 It is five thirty in the afternoon in Crans-Montana. While others are chucking their snow poles in a corner and drawing a hot bath, we meet up with Olivier Jacobs at a car park in Aminona. Our sports programme for the day is just getting started: At dusk we will hike up the mountain in snow shoes and, when everyone else is already in bed, we will sledge down the mountain under the full moon. In between we will admire the panoramic views, have fondue and wine, and find out how Olivier managed to overcome the greatest crisis of his life. But let's take things step by step.

"Ello guys, so nice to meet you, and so sorry for the delay, I only come from the ski tour", Olivier says with his French accent as he energetically gets out of his car. He opens the trunk, gets out three pairs of snowshoes, and hands them to us. We strap them on while he changes out of his red ski tour outfit into his black evening sports outfit. He has a boyish charm - excited, a bit hyper, and bursting with energy. He laughs a lot. Almost more than he speaks. "So guys, let's go!"

Off we go. You have to keep your legs widespread to walk with these tennis racket-like attachments under the soles of your shoes. It does not take long to get used to them, and the poles help, too. Snow hiking is not quite as straining as we expected, so we have enough energy to admire the fantastic view of Valais to our right. "Look how beautiful it is!" says Olivier, to us, or perhaps to himself; it is hard to tell.

Since 2014, Olivier has been the owner of Adrenatur, an adventure agency. In winter, he offers ski tours, night sledging and dog sledding. In summer, there is canyoning, mountain biking, and paragliding. And an adventure park. "Everything with adrenaline", he says and laughs. We ask to take his picture, but Olivier is a bit unsure how to pose: "It's not what I usually do". We tell him to just keep on laughing.

After about twenty minutes, the trail becomes steeper, narrower, more densely wooded, even more gorgeous. Dusk turns the snow-covered trees into a picture perfect landscape and a clearing into a breath-takingly beautiful fairy tale scene. Behind the next hill, as the pink evening sky fades into dark blue night, our first surprise awaits us: Jacky, the chalet host and our snowcat chauffeur tonight, greets us with thinly sliced speck, prosciutto, cheese and other local specialties, served with bread and wine.

While we happily enjoy the unexpected treats, Olivier tells us about the ropes course, waterfalls, and hanging bridges in his adventure park and the downhill monster scooters that are so popular during the summer months. He tells us about the ski tours and snow hikes that he loves so much. About the lovely people he meets, who come back again and again. "For me, the Valais is one big adrenaline adventure park. You can do anything you want to, because we have everything here! It's really cool, really cool!" he laughs again.

Part II: Riding up the Mountain and another Surprise

Jacky drives us up the mountain in his snowcat. It is colder up here. The lights in the valley below twinkle and become smaller and smaller, just like they do when you take off in an airplane late at night, leaving the world behind you. After ten minutes, we arrive at Cabane de la Tieche, our chalet, which is covered in a thick hood of snow. We step into the small house and are surprised yet again: Our table is already set - and we have the place all to ourselves tonight. We toast with mulled wine in tiny paper cups (after all, we still have to sledge down the mountain in a bit) and ask Olivier to share his story. And so he begins.

Twelve years ago, his girlfriend at the time had the idea to move from their home in Belgium to Crans-Montana. Olivier was thrilled and quit his jobs working as a sports teacher and at an insurance company. They moved to the place he was familiar with since his childhood. But only three days later, his girlfriend broke up with Olivier and left him behind with a broken heart and no plan what to do. It was a very difficult time, but mountain air heals all wounds and things turned around for Olivier. "Valérie and I got married last April", he beams and shows us their wedding picture on his smart phone; "I believe everything happens for a reason". We have fondue with crusty bread and discuss love, break-ups, and happiness. Then it is time to go, time to sledge downhill!

Part III: Downhill through the Night

We have to pull our sleds for the first hundred metres. The full moon glows above, illuminating the path, so we could actually do without our headlamps. Just before we start, Olivier asks us to turn them off and take it all in. "Listen. You hear? Nothing! Just nothing. That's so cool!" The silence is so big that you can actually hear it. And off we go. The ride is fast and we cheer as we speed down the mountain, enjoying ourselves like children. The course is so long that it takes about thirty minutes to get back to our starting point, including breaks we spend alternately admiring the view of the moon and the valley. It is ten o'clock in Crans-Montana. We will sleep very well tonight, as will Olivier. At home, where Valérie is surely waiting for him.