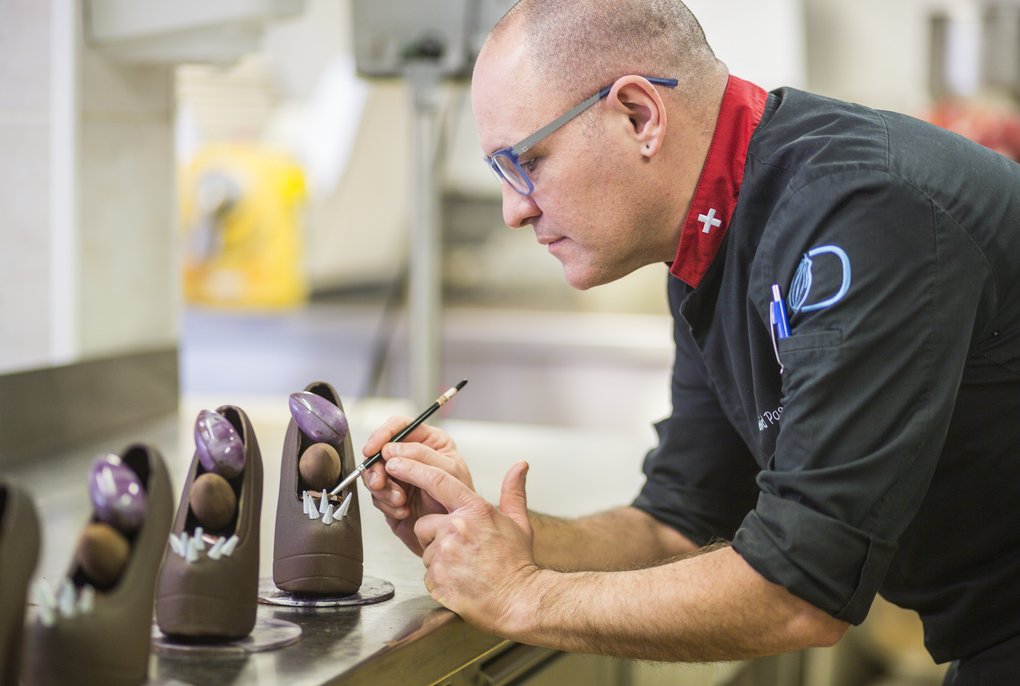 There was once a young boy that everyone considered a lazy halfwit. “You’ll never get anywhere, David,” was one of the things his teacher told him. And for a long time, David believed his teacher was right, which made him feel terrible. Luckily, David finally realised that his teacher might not be right after all. He decided to prove everyone wrong and became a successful chocolatier, owning a boutique and his own manufacture in the heart of the Swiss municipality of Crans-Montana. That pretty much sums up the story of chocolatier David Pasquiet.

It is around noon when we step into David’s chocolaterie. There are stainless steel tables with rows of unpainted chocolate eggs. David will later use a paint brush to splash colour on them as if painting on canvas. In the back we see an army of studded chocolate high heels, filled with, of course, more chocolate in various colours and shapes. “This year’s Easter theme is rock ’n’ roll,“ David tells us. „A while back we decided to offer something different from the usual Santa Clauses for Christmas and bunnies for Easter.“ While some of their customers seem to like the idea, others don’t. However, doing something for the sake of pleasing others goes against David’s philosophy: „I make products that I like to eat myself. And so far, this approach has proved to be successful.“ That’s why David loves what he does, and it seems like his passion pays off: In 2013, David was named „Swiss Chocolatier of the year“.

David comes across as a humble man, grateful for what he has achieved. But that doesn’t mean he is overly modest. He definitely knows his skills. That wasn’t always the case, especially back then when his teacher told him he was a good-for-nothing. Sometimes these painful and seemingly wrong experiences are what make us discover our inner strength. In hindsight, defeat very often turns into victory.

Embracing the here and now

David’s life didn’t follow a straight path. Sure, he has always loved chocolate, but then again, who hasn’t? After graduation he started a cooking apprenticeship and wanted to become a chef. In 2005, David and his wife took over a little shop producing and selling nougat. But David soon got bored and wanted more. That’s when chocolate came to his mind, because it would offer so many more possibilities. It would finally be something to be creative with! So David started trying different things. He kept mixing and combining new ingredients and was continuously surprising himself. He read all the literature on chocolate, attended classes, watched Youtube videos. And very soon, the little nougat shop turned into a full-blown chocolaterie that David named “L’instant chocolat!, meaning “Chocolate moment”. “Chocolate makes for happy moments. It makes you relax, it makes you live in the moment. And it brings back childhood memories,” David tells us.

In David’s shop, in the heart of Crans-Montana, you will find original, colourful, shiny chocolates, so called ganaches combining flavours like strawberry & cactus flower, apricot & saffron or matcha & yuzu. You will also find chocolate bars, chocolate covered nuts and chocolate spreads. Blue is the shop’s dominant colour. „I was told that blue is a no-go for anything food-related. But I have blue eyes and I also wanted to have a blue branding,“ David recalls. There are some delicious samples to try on the counter. The Pasquiets travelled the globe to find the chocolate that is now the basic ingredient of almost all of their products. They found it in Peru: „Their“ field and cocoa beans meet all the criteria they expect from their products: organic quality, no flavour enhancers, fair labour conditions. „This chocolate is the main ingredient that defines our identity,“ David says. Other ingredients such as raspberries or strawberries he likes to buy from regional producers.

What David likes most about his work is being creative and developing new ideas. It doesn’t always work out, but that is part of game: “I once tried to make parmesan chocolate. That definitely didn’t go well.” Launching a new product usually takes about four to six months, he tells us. Experimenting with new flavours and products is part of David’s daily business: “Your rivals never rest. That’s why an ongoing creative process is the key to success. But that also makes you stay young.” He often turns to his 14-year-old daughter for advice, he tells us. And his most productive time of the day is in the early morning, when everyone is still asleep: “I start working at six in the morning, when all is quiet. I love that.”