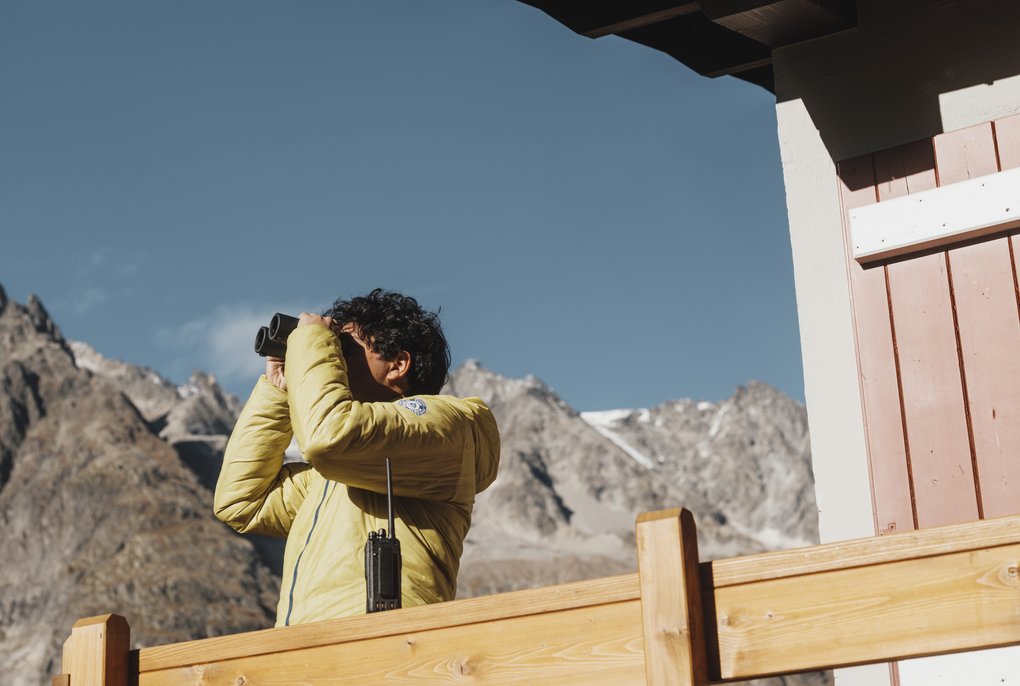 There’s a lot to talk about with Alexander Campedelli: His professional past as an engineer, his voluntary work as president of Courmayeur’s mountain guide association or his current life as hut warden of the Rifugio Monte Bianco. He will answer questions politely and thoughtfully, but you will only get his full attention when you steer the conversation towards the mountains. In a north-westerly direction, to be precise, because that's where "his mountains" are: the peaks of the Mont Blanc massif. They rise into the sky above the Val Veny like oversized stalagmites. Many of them reach over 4,000 m above sea level, a threshold at which most people lose their breath. For this 40-year-old Italian from Courmayeur, however, that is exactly where his passion starts.

Mont Blanc, Mont Maudit, Dôme de Rochefort, Dent du Géant, Grandes Jorasses and all the others - Alexander knows them all, has climbed them all. And you can admire them all from down here: from the terrace of the Rifugio Monte Bianco. That’s where we meet Alexander Campedelli and his wife Francesca who have recently taken over the wood-and-stone shelter built in 1952. It is situated at the foot of Mont Blanc, slightly elevated on the valley floor of Val Veny, very picturesque. It was once the base camp for alpinists from all over the world who wanted to venture the ascent of the "white mountain". There was no talk of Alexander and Francesca then. But the Monte Bianco hut is still standing, even if "the clientele of the Rifugio is different today", Alexander knows. Only very few guests still climb Mont Blanc from here; most visitors come for hikes, mountain biking or ski touring. "They are looking for peace and seclusion", which can be found in the pristine wilderness of the green valley. "An idyllic place," says Alexander, "a place like no other," says his wife Francesca, who is just setting the wooden tables for the evening. The two have been a couple for over a decade; he loves climbing, she loves skiing. What they do have in common is their love of the mountains and nature, and so they immediately accepted when they were offered the management of the hut. "We wanted to raise our children here," say the parents of two. It was their long-cherished, shared dream to live in a mountain hut one day. After all, this is the closest you can get to the mountains.

In winter, the piste runs right next to the hut. "A big plus," says Alexander, "in a normal winter," adds his wife in turn, and they both laugh. After all, no one could have expected two years ago that the entire world would suddenly come to a standstill. That was shortly after they took over, "and all of a sudden we had an incredible amount of time," says Alexander, instinctively looking up to the mountains. He would have preferred to spend his time up there in the last months, but "the government's covid measures prevented us from doing so". So they turned their attention to renovating the hut. And special attention was paid to the use of natural materials. Plastic cans, containers, drinking bottles – it all had to go and make room for glass and renewable materials. "Then we started to tackle our food supply." Local suppliers were contacted so that today, only organic and regional products make their way onto the menu. Even the beer comes from a local brewery: "Small changes can have a big impact." And Alexander used his newly found time to make these changes.

Before the Monte Bianco hut became the centre of his life, Alexander had a job in the valley and one in the mountains: During the week he worked at his engineering office, at the weekends he guided guests up into the mountains. He was so good at it that he was elected the youngest president of the mountain guide association of Courmayeur. "An honourable task" that he enjoys, but it also demands a lot of his time. And at some point it became harder to balance work, family and spare time and he knew he had to make changes. "The Monte Bianco hut came just in time," he says and looks up at the mountains again. He can't take his eyes off them; it almost seems as if he were searching for something in the grey-white landscape. "Bad habit," he apologises. He just likes to keep his eyes on the mountains, he explains, "because you never know what the day will bring." And he, the experienced mountain guide, who is also a long-time member of the local mountain rescue team, is most likely right about that. Just a few weeks ago, Alexander received a call in the middle of the night. Within five minutes, a rescue helicopter landed in front of the Monte Bianco hut. A young boy was missing on the glacier, "we had no time to lose. Because even with the appropriate equipment, no one will survive for long at such icy heights, and it was extremely cold that night. But it was starry, which made the search easier: "Fortunately, we were able to find him in time." And just in time for sunrise, Alexander was back in the valley, ready to prepare breakfast and tell his guests about the events of the night. He likes it, talking with his guests, sharing his knowledge about routes, tours and conditions. Very few of them know that they are getting tips from the president of the local mountain guides himself. Alexander doesn't make a big fuss about that. He is a modest person. And since he lives at the Monte Bianco hut, "also a happier person".

A massive pair of binoculars lies on one of the wooden tables. "They're always here," says Alexander, "for our guests.” But also for himself, because when there are no guests around, Alexander takes them and looks up again. And then, for a moment, he draws his mountains very close. Until the next guest arrives and Alexander goes back to the hut, back to work. But with his head, he is always in the mountains.