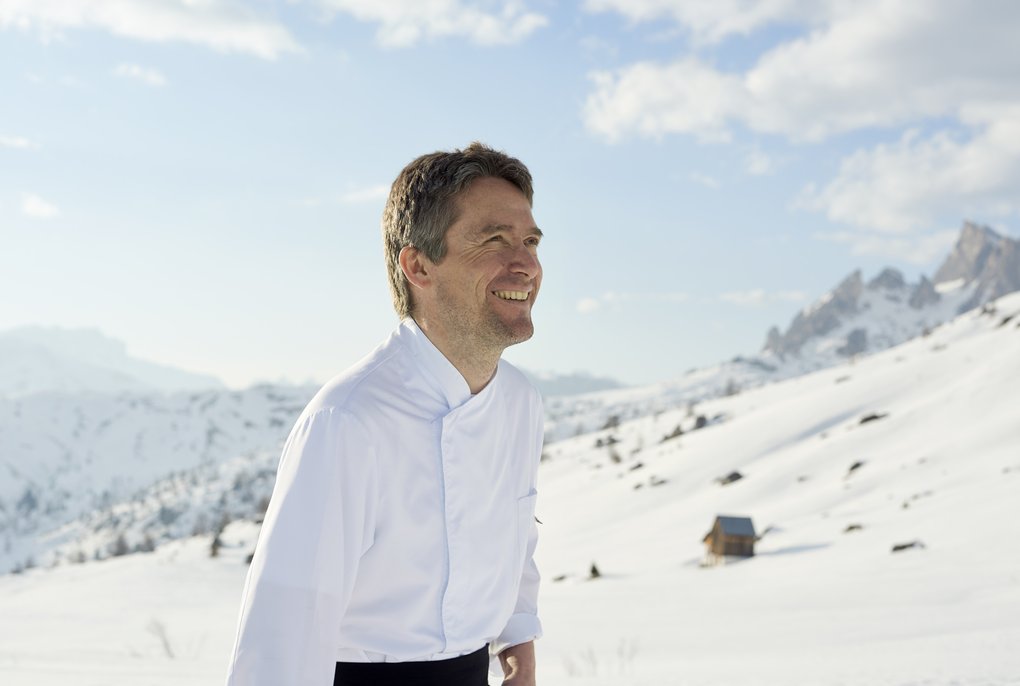 A drive up the Giau Pass, one of the steepest in the Dolomites, makes for a mindblowing experience. Just as we arrive at some plateau, stunned by the beauty of the expansive mountains, we find ourselves at the rifugio Da Aurelio with a sun terrace and a priceless panorama. What we discover inside is as equally awe-inspiring. Best of the Alps meets chef Luigi “Gigi” Dariz who can be rightly called the alchemist of the alpine cuisine.

“Try this,” says Gigi Dariz and hands a small plate with a piece of fluff on it that looks like an architect’s three-dimensional rendering of some geometrical shape. Sweet fried braids, hand picked outside the restaurant Da Aurelio, in the wide alpine meadows where the famous edelweiss flowers grow. Being up here at 2236 meters you are tempted to think that food resources are scarce, but Mr. Dariz proves the opposite.

“Take Junipers for instance, or fir treetops,” he says putting some of the fresh green delicacies infused in oil under our noses. A slightly austere yet breezy aroma tingles the senses: It is the magnificent taste of the mountains in their very essence. Looking at some of the other plates that include moss and other exotic alpine forest delights, it becomes obvious that the placid and softly spoken Mr. Dariz has the wonderful ability to turn something ordinary into something extraordinary - alchemy at its best.
This alchemy with food seems to run in the Dariz family. The interest in connecting eating with health is apparent in both father Aurelio, who set up the restaurant in 1970, and son Gigi. Aurelio Dariz has always been aware of nature’s important function as medicine. “Although he cooked a classic Italian style he always included herbs that grow up here,” Mr. Dariz explains the style of his father.
After attending gastronomy school Etoile in Venice and working in reputable restaurants in Italy like Carracci in Bologna and a stint in England, Mr. Dariz junior returned to his home, the province of Belluno. It was then when he decided to follow his own path. 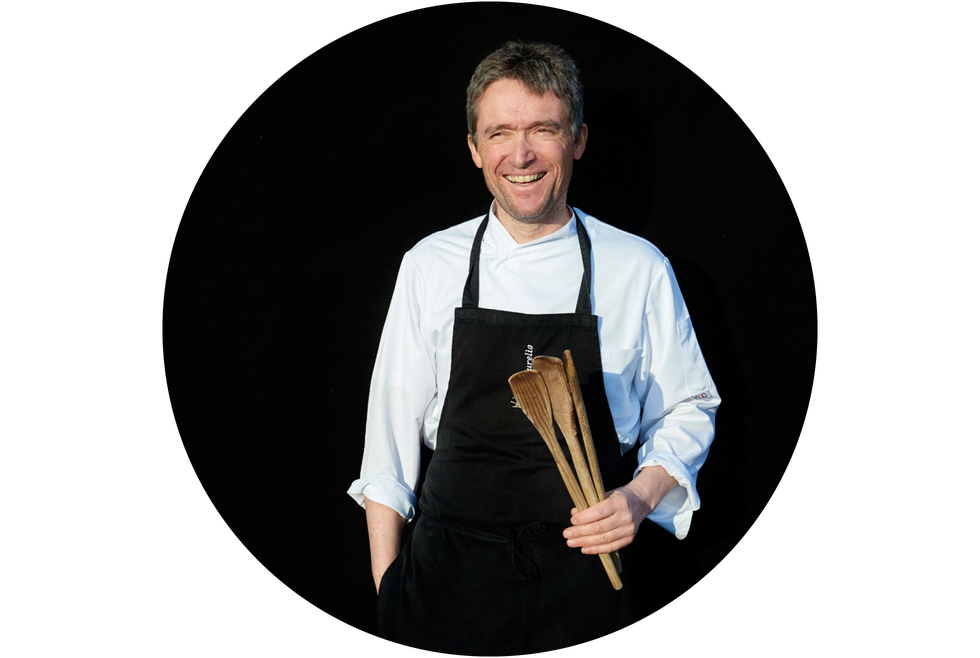 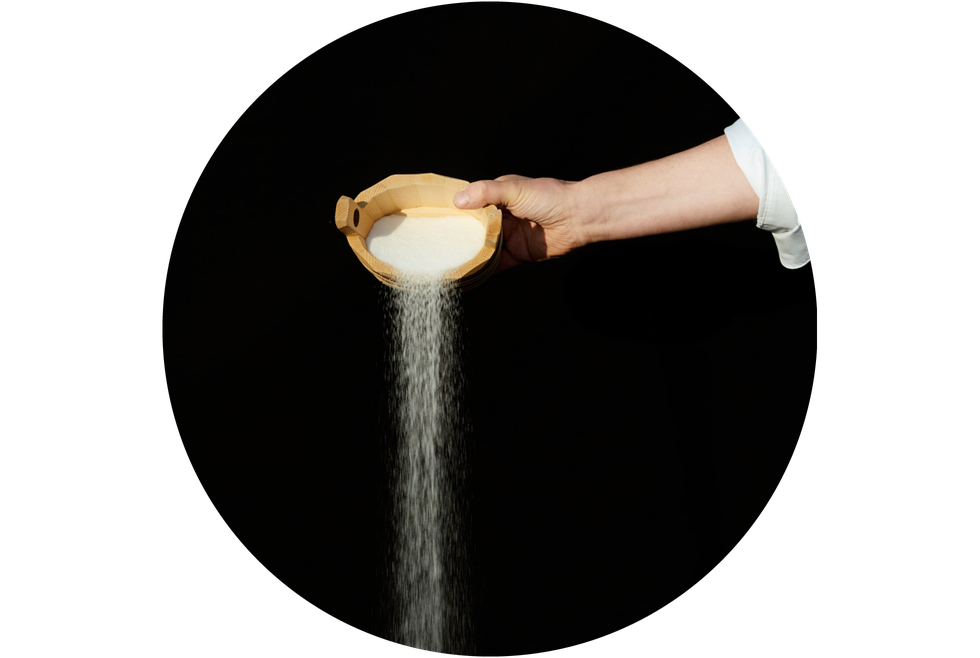 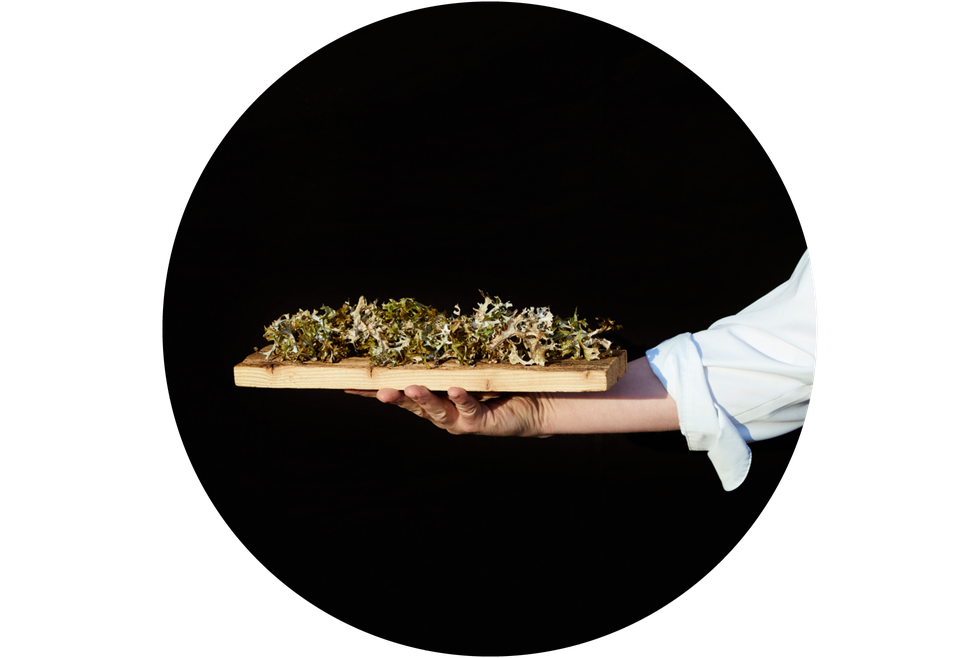 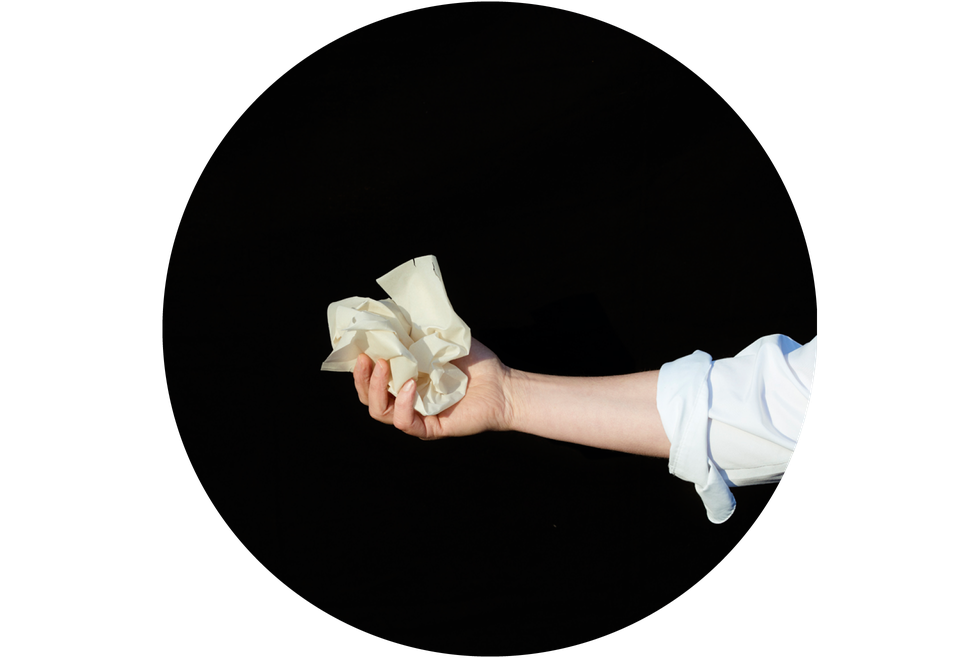 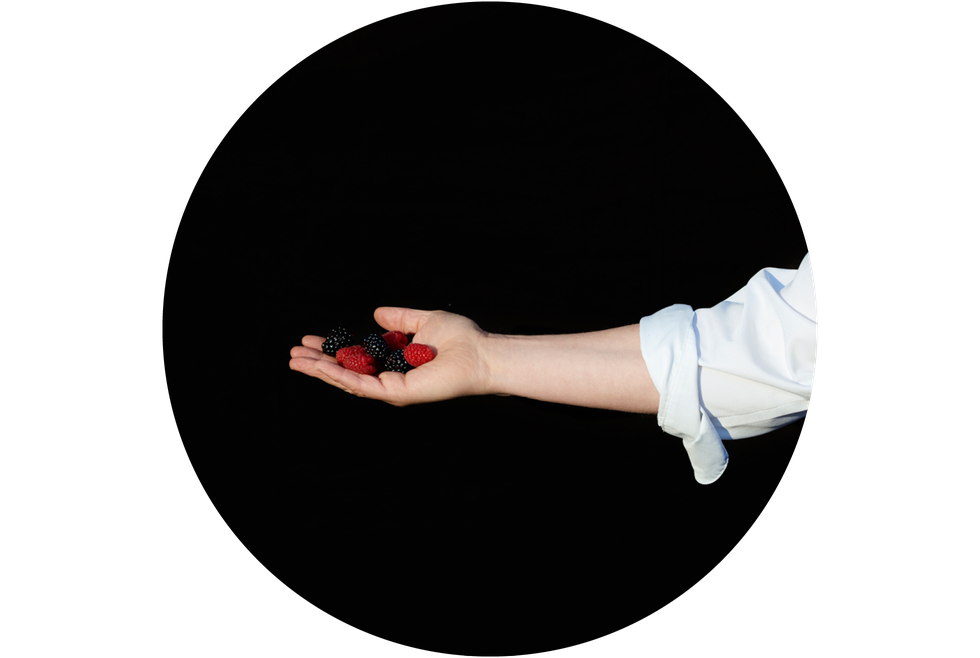 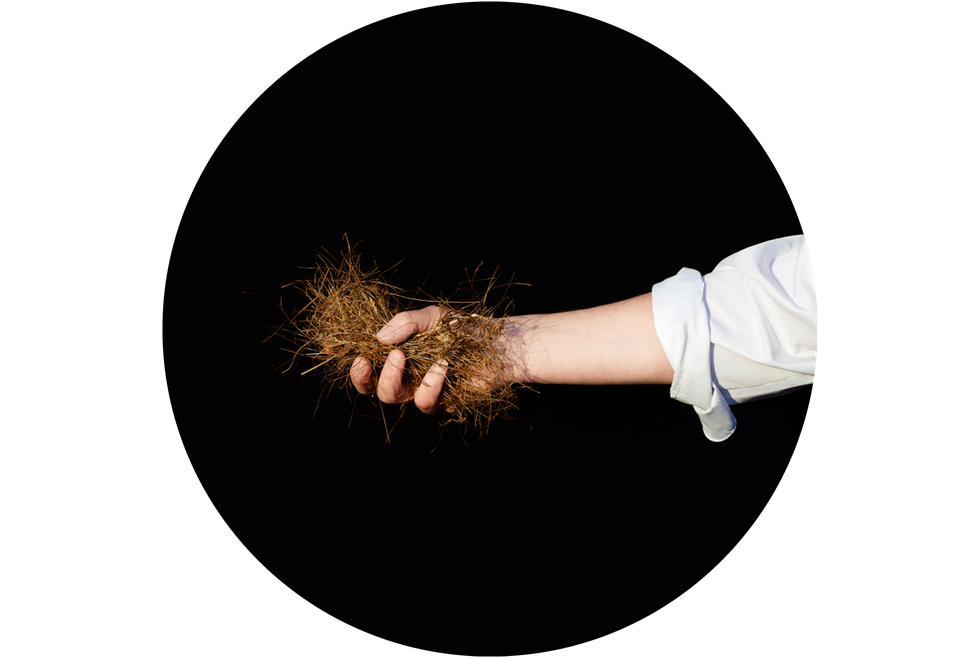 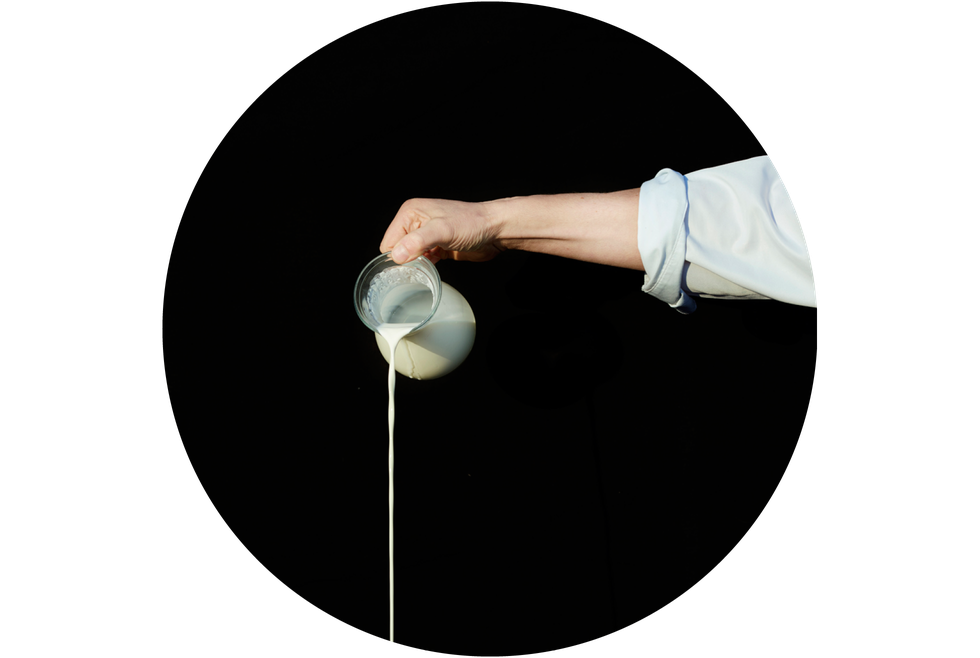 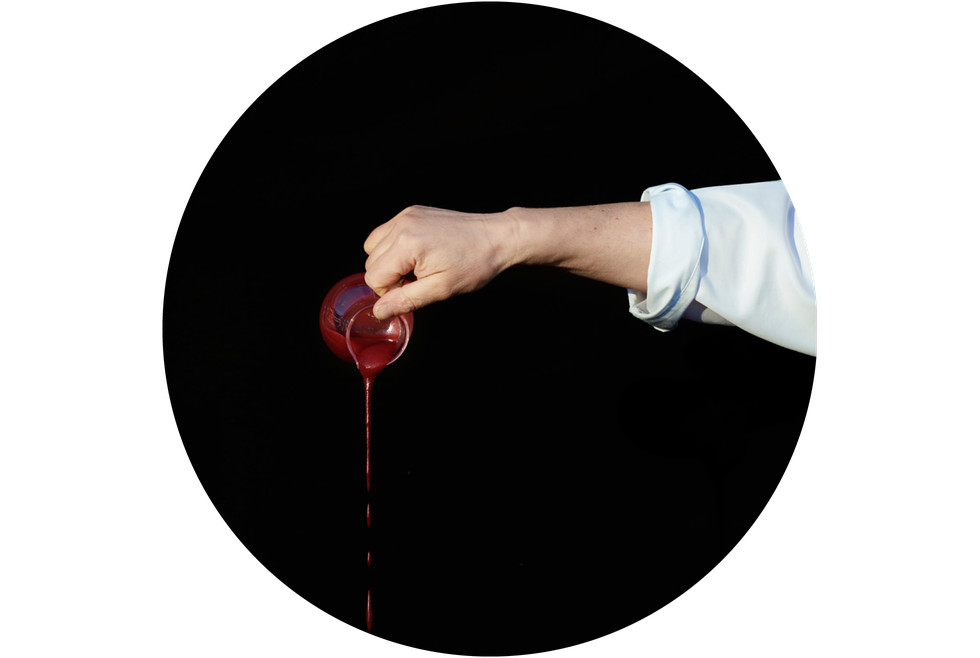 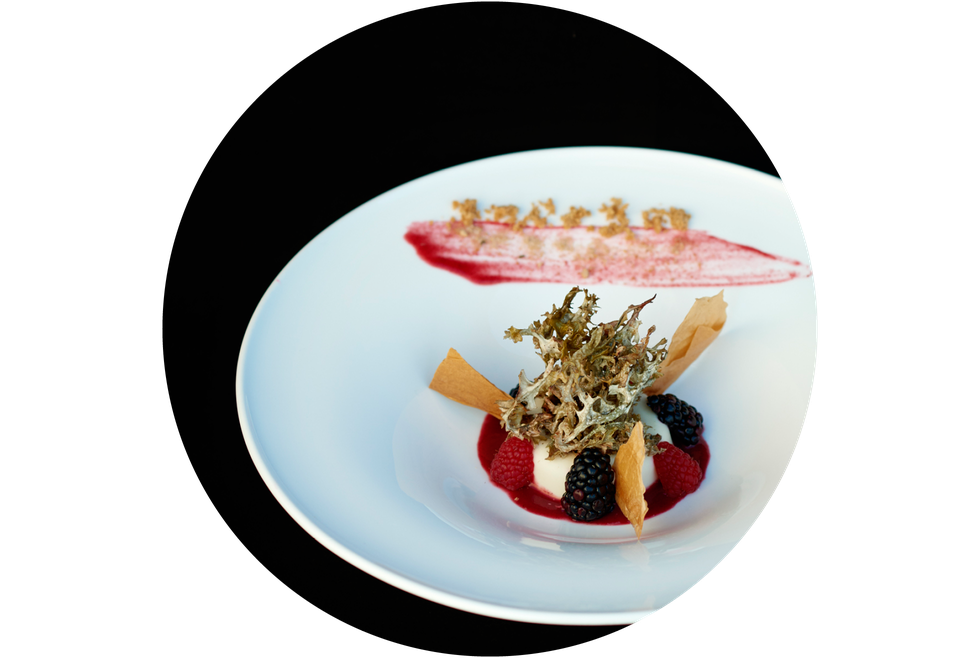 “It’s time to reflect on what we eat”

The overall menu in the rifugio Da Aurelio can be described as fusion kitchen, mixing classic Italian food with alpine ingredients such as the tagliatelle with chanterelle mushrooms or the delectable venison bresaola with erba cipollina (chives). What both father and son appreciate is the pleasure of the simple flavors, just like the essence of what Mr. Dariz calls Cucina d’Autore: dishes created with an authentic touch and committed to its true taste.
But it was a slow start for him when taking over the rifugio in 1998. “Most of the clients back then were still drawn to my father’s more solid cooking,” he says, but gradually Mr. Dariz transforms his guests’ pallet by introducing a new signature dish every season.

The meat comes from the brother of his wife who is the local butcher in Cortina d’Ampezzo; the cheese he sources from the El Brite de Larieto. In summer, Mr. Dariz gives guided tours in the mountains educating people about native herbs, their health benefits and the ones that do the opposite. “After all, you don’t want to pick the wrong ones,” he smiles.

Mr. Dariz’ restaurant is part of the popular Alto Gusto themed dinner evening that features the best of the cuisine in the Dolomites. It consists of ten of the best restaurants in the Belluno area. He also likes to connect with the culinary scene beyond the mountains and this led him to Stefano Catenacci in Sweden, who occasionally cooks for the royal family. And it was through him that Mr. Dariz got the chance to learn some Swedish treats in exchange for teaching the secrets of making good pasta. “Food is very important for us,” Mr. Dariz smiles. “We live to eat.”
Back home in his cosy kitchen with a perfect view onto the mountains, he loves working with his dedicated young team and having a bit of fun listening to Swedish House Mafia when making gnocchi. Up here you are not in a hurry, except when you forgot to buy the milk, which makes for a 30-minute drive down the mountain to Cortina.

The legend of a beautiful sunset

In the late afternoon the mountains are covered by what the locals call enrosadira - different shades of red that make for the most incredible sunset. It refers to a legend of the mountain tops entirely covered with flowers. When the king was captured by the enemy, he put a spell on the mountains, transforming all the flowers into rocks, so that they could no longer be seen by day or night. But he forgot the power of nature, and so with every sunset the colors of the roses symbolically bloom. Mr. Dariz opens a fine bottle of prosecco. Yet another way to celebrate la dolce vita.