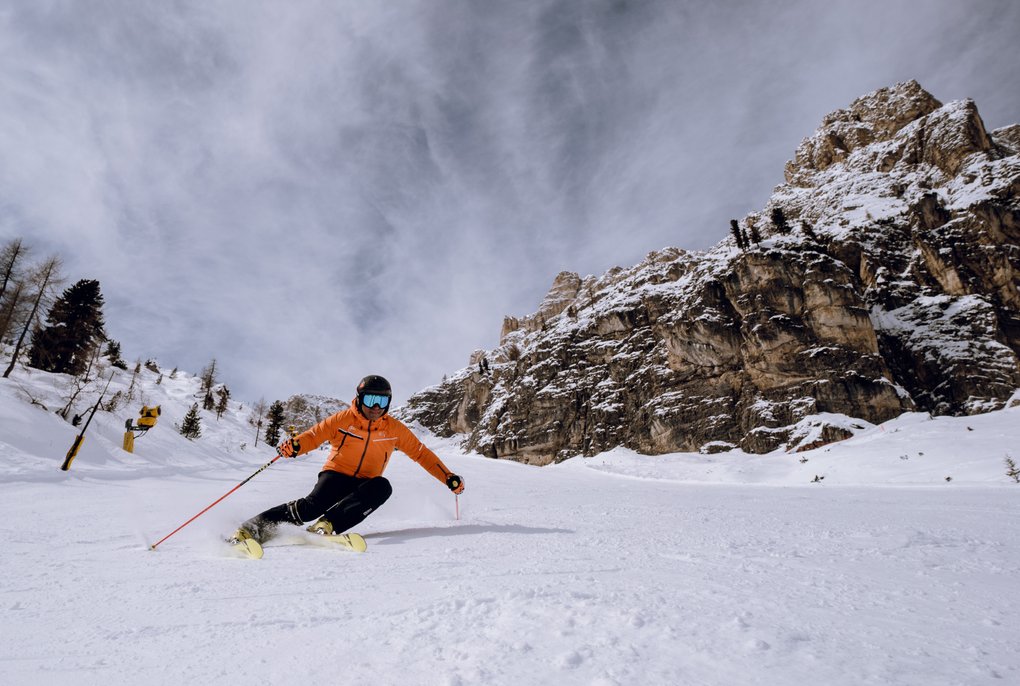 It’s been more than ten years since Kristian Ghedina ended his career in racing but everyone interested in alpine skiing still remembers him, even those who are not fellow Italians or big fans of the sport itself. Although Ghedina was a very successful athlete (with 33 podium places under his belt to prove this), many do not remember him for his athletic achievements but for one the sports’ most spectacular moments. In the winter of 2004, as he reached the finish jump of the legendary Streif in Kitzbühel at 80mph, Ghedina pulled his legs wide open into a straddle position. An insane manoeuvre, and you don’t even want to imagine the implications of something going wrong in that moment.

Ghedina does not mind that this jump got stuck in people’s minds more than his successes as a racer, and he is at ease with his reputation as the “crazy guy”. “Even when I was a kid my dad was always worried about me. I was a little crazy and always somewhat kaput, with a lot of bruises and injuries,” he tells us, laughingly, in his charming and not entirely flawless German. But how did he come up with the idea of pulling that legendary stunt at the end of the Streif race? “It was a dare,” he laughs. His cousin was watching him in the finish area that day and wanted him to do something spectacular. And so he did – winning a pizza along the way.

It was not only this daredevil attitude that won him cult status among fans of the sport in his active days. You also always had the feeling that he was genuinely having fun and loving the sport. Never did you get the impression that he was overly ambitious or dogged. “I was lucky because I was Italy’s only successful downhill racer at the time, so I could take it easy sometimes without immediately risking my ticket,” Ghedina remembers. But he was successful all the same. Among the most memorable moments of his career he counts the victories in his hometown of Cortina and on the legendary Streif in Kitzbühel.

He had always been enthralled by taking risks and going at high speed, and so he took to racing like a fish to the water. Still, becoming a professional skier was not what he wanted in the beginning. As a kid, Ghedina dreamed of being a motocross pro, but there were no opportunities for him to learn and practice that sport. So skiing it was. “And that was okay for me. I just wanted to go fast.” In the end, however, Ghedina still found a way into motorsports. After his career in professional skiing, he competed quite successfully in the European Touring Car Championship (ETCC) for several years. “I even competed against former Formula 1 pilots like Christian Klien or Vitantonio Liuzzi,” he tells us. Unsurprisingly, he also loves driving in his day-to-day life off the circuit.

Today, Ghedina owns a skiing school and a pizzeria that is currently run by his uncle, in Cortina. Moreover, he serves as brand ambassador for both Audi and the FIS Alpine World Championships to be held in Cortina in 2021. And just like in his earlier careers, it’s having fun what drives him – and what makes him the perfect ambassador. “I love being around and talking to people, it’s just what I enjoy a lot. And it seems like people like me, even the Austrians, although we always had a lot of competition,” Ghedina says, laughing.