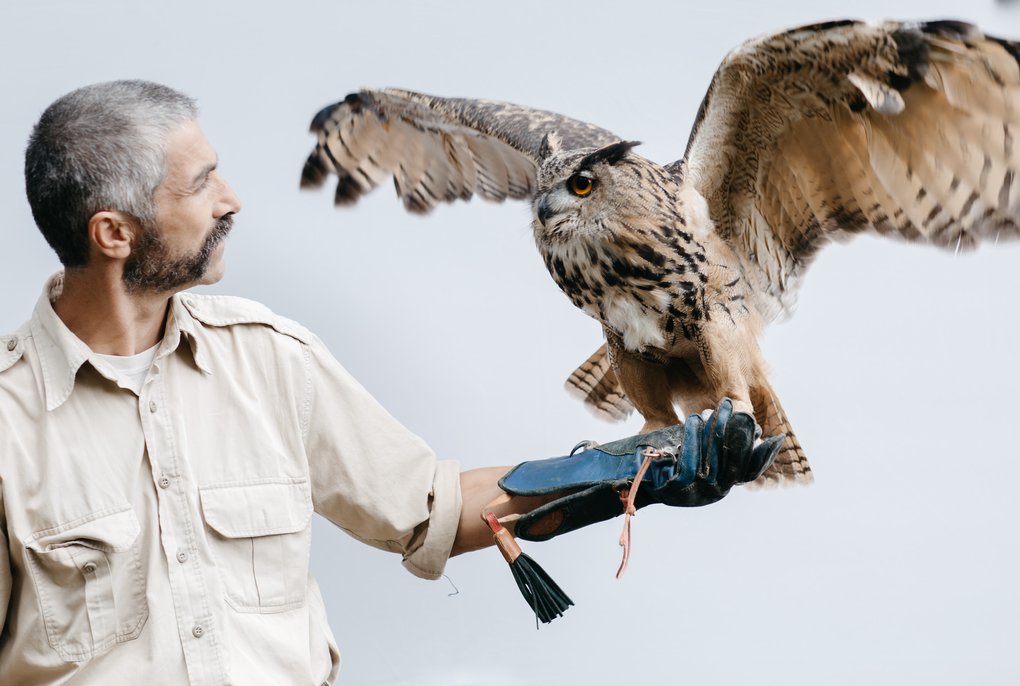 Fausto Menardi Diornista opens his fridge, takes out a dead chicklet and cuts it into small pieces. Next to the container with the chicklet is a dead squirrel. “I found it on the roadside,” he says. Diornista, the falconer, is preparing for his next show. “Those who are interested can witness all aspects of a falconer’s job.” It is not about shocking people, he explains, it is about creating an understanding for the birds’ life: Although his birds are from captive breeding and could hardly survive if left to their own devices, they are still accipitriformes, birds of prey and carnivores. That is why falconry is also “teaching for life,” says Diornista, “it has a lot to do with taking responsibility. If something happens it is always the falconer’s mistake, never the bird’s.”

The number of birds in his possession varies, most of the time he has between seven and ten snow owls, eagle owls, hawks and eagles. The initial training of a new bird takes about 20 days. “In this period, I carry the bird on my arm all day long. Even when I go to the loo,” he laughs. Every now and then, the bird will get little treats to foster trust and a reliable relationship. “After some time I then put the bird on a perch and walk a few steps away with some food in my hand. This way the bird begins to understand how the feeding works.”

For three years now, Diornista has spent three summer months on the premises of his falconry. The rest of the year he works in his regular job as a carpenter. He first encountered falconry in 2002 when he watched a show in Merano. “It was like a struck of lightning, hitting me from head to toe. I immediately knew: This is what I want to do,” he recounts. In 2005 he took the first classes, many more followed in the years after. With the help of a friend he built aviaries and benches along the way from Cortina d’Ampezzo to the Falzagero Pass and, in 2012, opened “Falconeria Diornista”.

The shows are basically simple: The birds are released and know that beautiful flights will be rewarded with food back on the falconer’s glove. “80 per cent of their motivation is hunger, 20 per cent our relationship,” explains Diornista. When you see the birds soar up in the sky with powerful strokes or return to Diornista – gracefully like an eagle owl or nosediving like a falcon – you can easily understand what he finds so fascinating about these creatures.  “A sparrow may fly but it does not hunt,” Diornista says. Still, he always puts the birds’ wellbeing above doing a spectacular show. “I never keep my birds hungry before a show to make them fly better. It is me who does these shows and I do them exactly as I see fit.” And those who see him interact with his birds know that he could never starve them.

“People could see my tears”

A special relationship is between Diornista and peregrine “P.11”, named after a Polish fighter aircraft. Shortly after he bought the bird, it got entangled in a cord while playing and ended up hanging head-down on a rock. Diornista delivered him from this dangerous situation and ever since, P.11 trusts him unconditionally: “He wouldn’t even think of flying away. If someone opened his cage he would just sit around and wait for me,” says Diornista. “Seeing him fly with the Dolomites in the background gives me goosebumps every time.” One day, during a particularly beautiful flight, lightning struck and illuminated the whole scenery, and Diornista was overwhelmed with the beauty of the moment. And he didn’t even try to hide his emotions. “People could see my tears, I was just so touched. It was wonderful.”