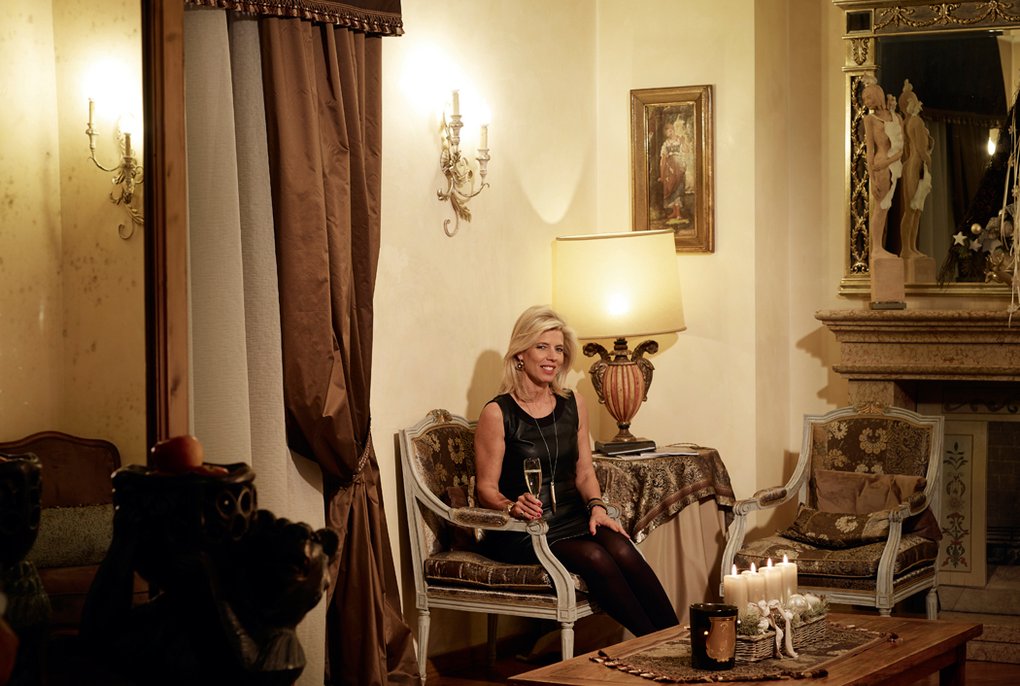 Taking a stroll down the main street in Cortina d’Ampezzo right around aperitivo time, you can’t help but be drawn to an electric feeling on the streets where that glamorous splendour of the past melds with the urban edge of the new crowds: Casually worn fur coats complement loose fitting sweat pants, and dogs are just as fashionable as their owners. Everyone is out to see and be seen - doing a bit of strusciare (strolling) up and down Corso Italia - ready for chance encounters with a friend or a stranger; all while documenting the excitement of the moment on their Instagram channel. “Anything can happen in Cortina!” exclaims Elisabetta Dotto, the tall, gracious lady who welcomes us to Hotel Ambra. It is nestled between the majestic Monte Faloria and Tofana de Rozes mountains and in the historic heart of the old town that dates back to the 6th century BC. She has an inimitable passion for people and it immediately makes you curious to hear more.

There is a signboard welcoming visitors to the beautiful Ampezzo Valley, set amidst the breathtaking panorama of the mountains which form part of the Southern Limestone Alps. When Ms. Dotto came here on holiday she fell in love with a 150-year-old house that is now the exquisite Hotel Ambra. Back then it was a modest 3-star hotel but Ms. Dotto realised its potential. It was the perfect premises for her to marry Cortina’s longstanding hotel history with her wealth of experience in the business. Ms. Dotto comes from a long lineage of hotel owners: Her grandmother ran a small bed and breakfast in Treviso in the Veneto region and her father built a hotel close to the Venetian seaside. She started learning the ropes of the hospitality industry from an early age: “When I was six I handed the keys to the guests, at 14 I was in charge of the booking registrations, and at 16 I manned the reception by myself.” When the place came up for sale she snapped it up “with all the existing staff”. However, as with life, plans don’t always turn out the way we want. Soon after Hotel Ambra opened, Ms. Dotto was confronted again with a challenge when she realised that the modern guest required something completely different than she had expected.

What Ms. Dotto found in her guests was a newly emerging spirit of self, based on continuous shifts in society, but mostly in the way modern families are structured. “One-parent families going on holiday become a norm, there are more single people or groups of friends coming here.” Her voice has a mellow sound to it as she explains to whom her successful concept caters. “And the occasional broken hearts who come to Cortina for a little distraction or to seek beauty and nature.” With the modern lifestyle as a focus and la dolce vita in mind, it is easy to see how Ms. Dotto has got it right. This is apparent when you visit Hotel Ambra’s website: Three beautiful young girls check into the hotel’s luxury roof rooms - all with different themes taken from Cortina’s heritage. The carefully curated rooms feature a handcrafted wrought iron bed made by a local blacksmith, beautifully painted frescos or a jacuzzi tub. However, the rooms don’t just cater to the body but also the spirit, as a collection of poems by Rilke is found in the rooms - all requisites for a crowd living their own idea of la dolce vita. “We did not want to go for the couple who makes ‘chin chin’ to each other with glasses. This does not reflect real life that much anymore,” she says.

Protagonist in your own movie

According to a legend, the Dolomites are also known as the Grey Mountains: “They are protecting angels that make you feel good. “Being alone is a symptom of our society these days. But,” as Ms. Dotto concludes, “you don’t come to Cortina to be alone.” Like a truthful companion, she has a distinct sense for her guest’s need to enjoy themselves and translates it into thoughtful service: Breakfast runs until 4pm, the cleaning staff only starts their duty at midday. Cortina’s social life can be a bit taxing especially on the weekend: from skiing to strusciare, sauna at 5pm, getting dressed for aperitivo at 8pm and changing again for dinner at 9pm, finally a last change of outfit for the nightlife that starts after midnight. She has adjusted the hotels working hours to suit the needs of her guests. If you want to feel an even more intense bustle, then Christmas is the time. People arrive for three weeks to celebrate the season in their holiday homes and do their shopping at the local grocery oasis, La Cooperativa. “Allora, we have lots of young, elegant people here. Cortina and the mountains provide the perfect setting for them to be the protagonists of their own film.” And why is it that people are so keen on acting out their own persona? “Well, you open the door and everyone sees you. It is nothing but the joy of playing with the attention you get. It is exciting. You’re in a beautiful place with beautiful people,” Ms. Dotto explains. It feels like we just got to the very heart of what it takes to live la dolce vita. But maybe not quite.

The Essence of the Sweet Life

Ms. Dotto is never short of an exciting tale of hotel life. “We started off last Christmas holidays without electricity and it was an experience, you know,” she says. “I had 25 rooms departing, and 25 arriving. How do you not have your guests up in arms? So I mailed every guest and the young people were thrilled. It had just snowed and the stars came out at night. When electricity came back on the next day, New Year’s celebrations began three days early!” If Ms. Dotto represents Cortina in all its fibre then it means enjoying life, from one moment to the next.

Ms. Dotto also keeps her finger on the digital pulse of time as she avidly reads her guests’ comments on portals like Tripadvisor. Her profile nickname: La locandiera. It refers to a character from a comedy written by Luca Goldoni in 1753 based on a young female innkeeper, because being a hotel manager in 2015 involves a lot of drama and comedy: “I must be attentive to people who come alone or with a broken heart,” she says. And sometimes she even has to become a babysitter. This is not service you churn out mechanically; it is real human interaction. Perhaps out of everything, Generation 2.0 is looking to mingle with people with an open heart, and that is what Ms. Dotto fully embodies. Not without reason you find a quote from Marcel Proust in her tastefully designed brochure that says: ‘… an exquisite pleasure had invaded my senses, filling me with a precious essence; or rather this essence was not in me; it is me.’ Most probably the ultimate key to living la dolce vita.