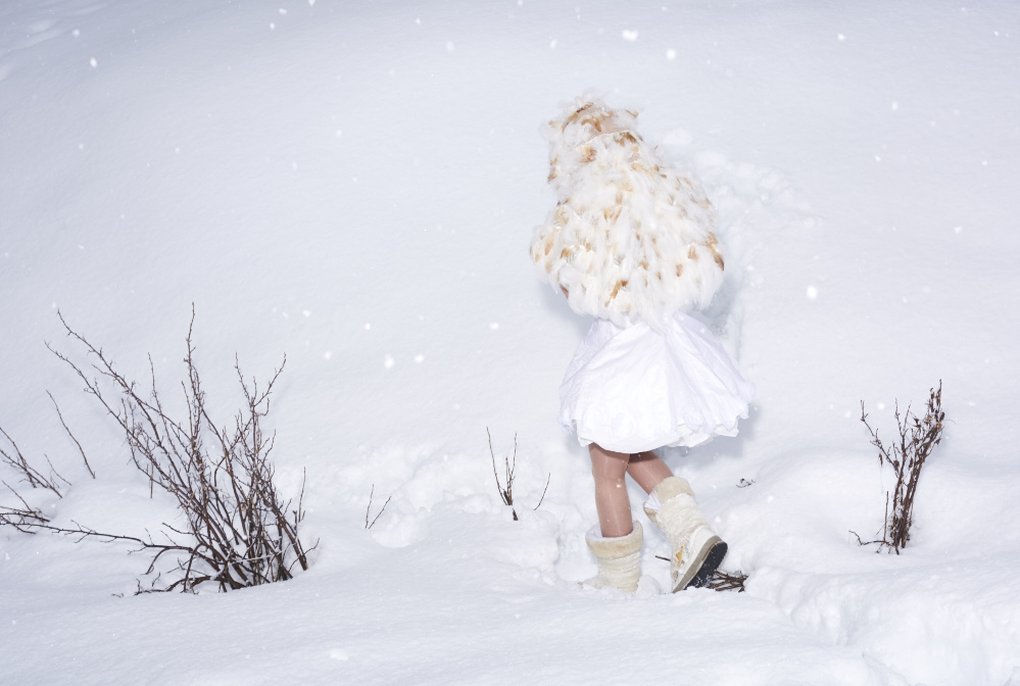 Tucked away below the breathtaking mountains of Chamonix, designer Valérie Pache sews elaborate dresses made out of neon colored parachute fabric. There is an air of positive certainty surrounding the tall Savoyan brunette as she shows the fashion world how innovation and haute couture can merge seamlessly, and her efforts do not go unnoticed by the likes of Vogue magazine. Best of the Alps visits the designer to attempt a photo shoot in the snow.

Although leaving Paris was not an easy decision for fashion designer Valérie Pache, she felt the need to do things in her own time. Upon her return to her hometown of Chamonix she found even more than that. The surrounding nature not only gives her support but represents a safe cocoon where she can withdraw from the outside and keep on working. When a friend gave her some used parachutes, Valérie decided to reinvent them as a garment. This was a brave decision for the designer (a graduate of the Paris College of Art) as the fabric is technically very difficult to work with because it is so light and lacks the structure of nylon and tweet. What’s even more intriguing however is the story behind each of the fabrics that many of the local skydivers and friends have donated for reinvention.

The most extreme being that donated by wingsuit diver Roch Malnuit. The fabric he gave her came from his very first wingsuit that he had sewn together himself. But all of her fabrics have a good story to tell. “The blue cape,” Valérie points out, “was a parachute donated by the first female wingsuit dive champion Géraldine Fasnacht”.

On the rack in her lounge we find different designs of both long and short dresses, some with elaborate stitching and material processing. And yet only when you lift them up you are surprised by their lightness. Most of her designs have been featured in reputable French and European fashion magazines.  A little bit spacy, her dresses carry a wonderful flowing aesthetic as she gives these fabrics a second life. She receives a lot of requests from parachuting couples wanting to have their wedding dress made of the very fabric that captures their deepest passion. Valérie grabs some dresses from the rack for the shoot. It is still snowing heavily outside. Not the best condition to let the camera loose on her designs.

Chamonix is fertile ground for creative minds that enjoy flight

“When I started working with the material I felt the desire to show the fashion world who I am,” says Valérie. Having finally found her niche she sees Chamonix as a great base to work from. Getting out into the world gets easier if you can feel your roots. “It’s funny,” she says, “when I was young I actually hated the mountains. Then I missed them. And now I feel a very deep connection to them, but you have to be ready to receive this sentiment,” she ponders over a cup of tea in the kitchen.

Through the windows the mountains are one world. The house she lives in with her teenage daughter, her counterpart with equally beautiful long dark hair, was built by her parents. Her father was born in Vallorcine, the first village at the very end of the valley, and the family dates back to the Rhône Valley in the 17th century. It somehow makes sense for Valérie to be right here at this moment of her life and career.
Slowly the sun breaks through the clouds, putting a turquois-blue glow on the glacier. We quickly go outside to get a few pictures of her teenage daughter running down the snow covered road in her blue cape. Playfulness and gravity merge effortlessly in this moment.

Flying in her own direction

Valérie’s main focus is on innovation. She’s a self-declared autodidact when it comes to exploring new fabrics, and she recently started working on a ready-to-wear collection with materials from used Patagonia wind jackets. Her approach and hard work over the years have started to pay off. Vogue Italy, known for its progressive stance, nominated the light, parachute type fabric as material of the year, which was an important milestone for the designer. “I started to realise what I had already achieved in the industry,“ says Valérie. „It was like a confirmation of the firm roots I am trying to grow here with my business.“ This gives a clue to her charismatic personality: one of a Savoyan woman who knows what she wants and follows it through, on her own terms. And this attitude paid off a few years ago when the president of Chanel World knocked at her door. A final proof that you don’t have to be working in a bustling metropolis in this world to get noticed. Whereas for Valérie working with innovative fabric is her way to contribute to ‘the evolution of humanity’ amidst a landscape that inspires her to do exactly that: fly high in her own direction.