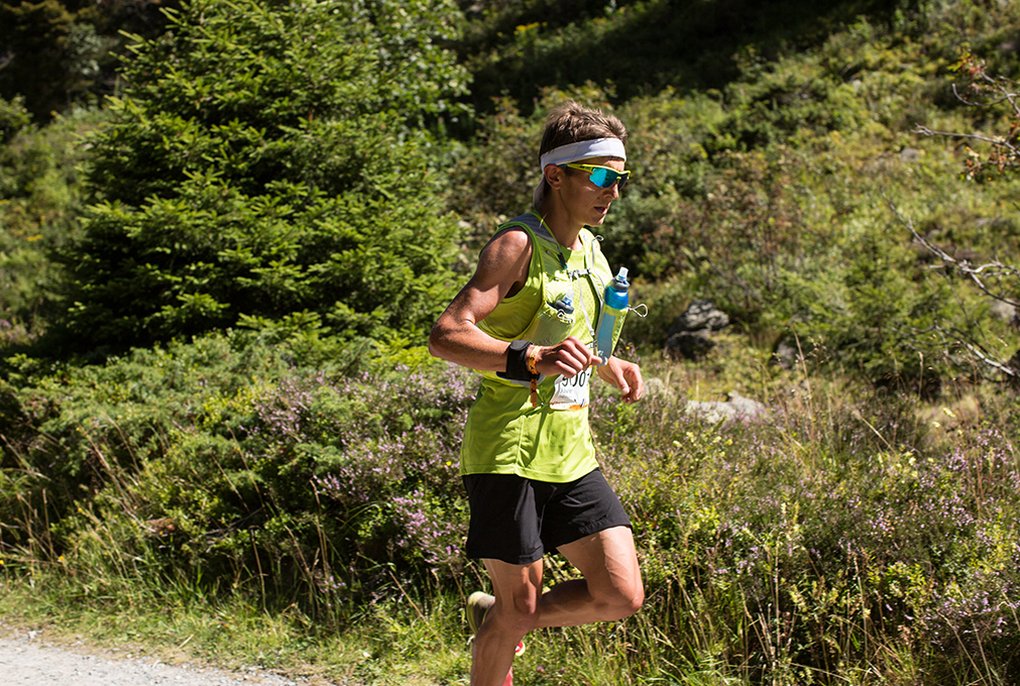 Racers have to complete an unbelievable distance of 170 (in words: o n e  h u n d r e d  a n d  s e v e n t y!) kilometres with an elevation gain of 10,000 metres. It is the ultimate challenge and a battle against the inner self. But that is not all. For thousands of volunteers, spectators and fans it is also one big party.

It seems like everyone in Chamonix is wearing stockings these days. We have been in town for only a few hours, but this special legwear instantly caught our attention. Young or old, men or women – we see people in strangely coloured knee-high socks everywhere. It can’t be the weather, because it has been sunny for days and the temperature is about 30°C. The latest fashion trend, maybe? Not quite. What people are actually wearing are compression stockings designed to increase blood flow in the lower leg. And those who wear them have one more thing in common: They run.

Every year in that last week of August, Chamonix turns into a real running mecca. Since its start in 2003, runners from all corners of the world come to the small town in the French Alps to face the almost unreal challenge of the “Ultra-Trail du Mont Blanc”, also called UMTB. “Our summer tourism season used to end around the 15th of August. But now that week surrounding the UMTB is the most important week for the whole region,” race director Catherine Poletti tells us. We meet Catherine in the Le Majestic congress centre, close to Chamonix’s central square, where she has just patiently answered all the questions on the upcoming race in a one-hour press conference.

Catherine and her husband Michael are two of the co-founders of the Ultra-Trail. Although some small races around the Mont Blanc were organized 20 years ago, today’s event really only gained pace at the beginning of the millennium. “We joined forces with some of our runner friends to create a whole new event. Since I was the only non-runner in the group, they decided I should be taking care of the organization,” Catherine Poletti recalls, smilingly. Today she is in charge of a team of more than 2,000 volunteers. And their small race? Turned into one of the world’s most famous ultramarathons.

When exactly a marathon can be called an “ultramarathon” is not clearly defined. Some argue that any distance longer than the usual 42 km can be considered an ultramarathon. Others say an ultramarathon requires a minimum distance of 80 km. The UMBT exceeds both by far. The trail follows the 170 km long Tour du Mont Blanc, one of the Alps’ most popular and most beautiful hiking paths. It starts in Chamonix and passes the Aosta Valley in Italy, then goes up the legendary Col Ferret pass at almost 2,600 m above sea level, then continues to Switzerland, and finally climbs up the Tête aux Vents before it goes back to Chamonix. „It is a journey. Runners cross three different countries. They are surrounded by nature, they pass glaciers, lakes, crystal-clear creeks. That’s probably what makes this event so fascinating. I at least do not know of any other race that offers such great variety.“

The Tour du Mont Blanc is usually completed in seven to ten days by an average hiker. After all, it includes nine mountain peaks and an elevation gain of almost 10,000m. But there is a time limit for UMTB racers: They have to complete the tour within 46 hours. This year’s winner, France’s Ludovic Pommeret, did the distance of 170 km (four times the length of a marathon) in 22 hours. And even a pro like him has to go beyond his limits to master the steep elevations and difficult descents.

The average leisure athlete would probably ask themselves: Why on earth would anyone want to go through this ordeal? “I think there are as many reasons to participate in the UMTB as there are racers,” Catherine Poletti says. A lot of participants seek to push their own limits – physical and mental. “For some people the race is a chance to experience what their bodies and minds are actually able to do!” she says, adding that one needs to distinguish between the top racers and the average participant: “For the pros, the competition and the results are most important. For everyone else it is clearly about challenging themselves.” And then there is this atmosphere and the enthusiasm that captures the whole town. Those who do not participate in the race help with the organization, and those who are not part of the organization cheer on the athletes from the sidelines. “It is more than a race, it really is one big party. The racers, the volunteers, the locals – they all enjoy this together!” Catherine Poletti says.

The number of registered racers proves her right: The 2,300 bibs given away each year are gone quickly. Due to the high number of applications there is now a two-tier selection process. To pass the first round, applicants have to complete a number of qualifying races. The actual participants are then drawn in a lottery. In order to accommodate the high demand, three smaller races were added to the event over the past years, although the word “smaller” must be seen in perspective. The shortest distance, the OCC, goes from Orsières to Trient in Switzerland and all the way to Chamonix. On the UMTB website, the OCC is described as the perfect race for “the less ‘ultra’ runners“. However, with a distance of 55 km and an elevation gain of 3,500 m, it is probably still “ultra“ enough for most athletes.

After our meeting with Catherine Poletti we go down to the Place de l'Eglise central square, where OCC winner and local hero Xavier Thevenard has just crossed the finish line. The narrow streets of the old town are packed with people. Thevenard is still gasping for breath when he gives his first interview to thunderous applause and cheers. But also all other racers finishing after him are cheered on by the crowd, one after another. Among the spectators we meet Anca from Romania. She is waiting for her boyfriend who is expected to finish any moment. Anca is as fascinated by the atmosphere as everyone else: „I kind of feel proud to be part of this event, even though I didn’t even take part in the race,“ she says with a big smile. She adds that she might start her own running practice once she gets back home, „to get ready for next year!“ And we completely understand why.