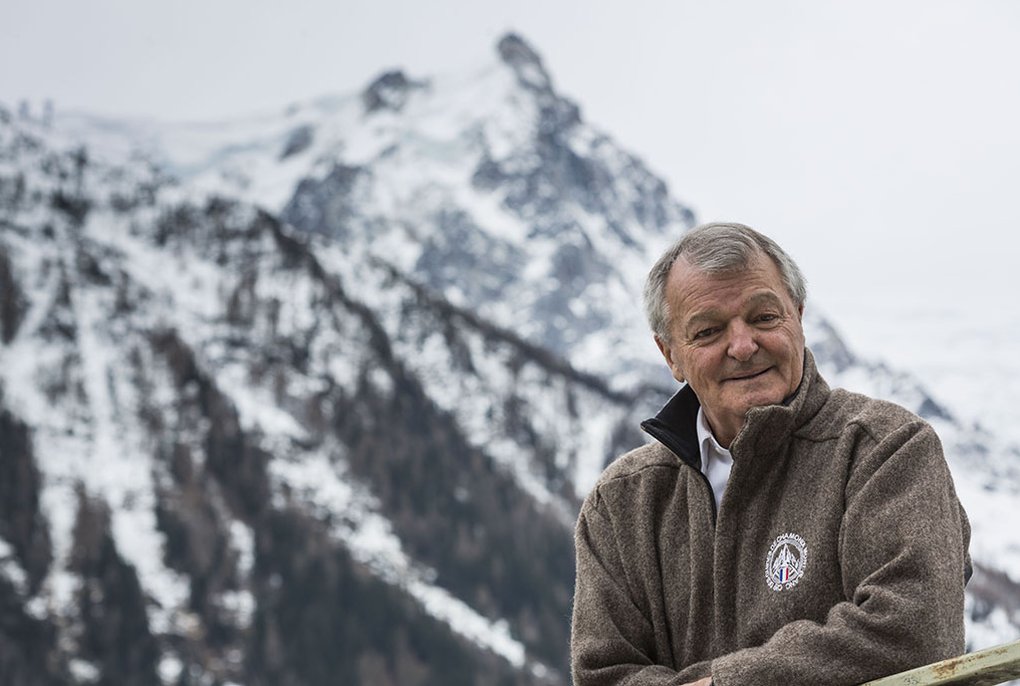 Christian Mollier is wearing his well-weathered mountaineering outfit: leather hiking boots, wool gaiters, ¾-breeches and a matching jacket in subdued colours. This is what he has looked like for decades, guiding his clients to the top of Mont Blanc. "I've been to the summit of Mont Blanc 71 times; I've scaled it on six different routes – I practically know it inside out," the seasoned alpinist tells us. Born in Chamonix, he began climbing as a small boy and was always eager to hear the stories his father, also a mountain guide, told him about the mountains. He led his first mountaineering tour as a seventeen-year old – and never looked back.

"I was always lucky. I don't know why – I'm not more careful than the others. But I'm very alert. And it's important to show humility, stay curious, and remember how to be amazed. I can do all of these things," explains Mollier, who learned all there is to know about mountains from his father. "My father taught me about the dangers and showed me spots that are better avoided. You develop a feeling and begin to sense danger. I have known mountain guides who ignored their own feeling of irritation – many of them subsequently lost their lives." Christian Mollier never lost his respect for the mountains. Perhaps this is why he has always returned unscathed? He did, however, experience the dark side of mountaineering many decades ago.

"I would always set out early, so I could hear the birds sing. With a bit of luck I'd find some old stone pines, beautifully contrasting the gleaming white of the glacier. (…) My enthusiasm hasn't waned with age; actually quite the opposite is true."

August 29, 1961: Christian Mollier is 21; he and his Italian client have been enjoying a gorgeous day in Vallée Blanche since the early morning. Together they get on the cable car connecting Helbronner point at 3.466 metres and Aiguille du Midi at 3.778 metres. They marvel at the phenomenal view, which literally takes your breath away on the 5 kilometres ride. Suddenly everything changes: A French Air Force jet loses its course ("The pilot seemingly wanted to fly under the cable car, but there wasn't enough space," Mollier elaborates) and cuts through the cable as it fails to pass beneath it. A widespread rescue mission follows, including Christian Mollier bravely rescuing himself and his client from the dangling cabin. The press later calls it "the exceptional performance of a hero". Six people in other cabins lose their lives. The mountain guide describes how he and his client survived the ordeal in his book "Une vie à gravir" (which can be translated as "scaling the mountain of life"), claiming it was a stroke of fate that saved them: "A twist of fate saved us while others were doomed."

In spite of the traumatic experience, Christian Mollier continues to love the mountains. "Unfortunately, the tragedies don't fade in our memories. But I have also experienced the greatest joys in the mountains, " he says as he refers to exceptional moments during climbing and hiking tours. Mollier cherishes his experiences in nature in the past and present: "I would always set out early, so I could hear the birds sing. With a bit of luck I'd find some old stone pines, beautifully contrasting the gleaming white of the glacier. (…) My enthusiasm hasn't waned with age; actually quite the opposite is true."

Christian Mollier has seen the world. He was part of the French expedition team to Mount Everest in 1974, scaled the highest summit of the Andes in Peru, and has written several books on his mountaineering adventures. He cannot fathom any other type of life than the one he has led, in harmony with nature: "Our entire planet is beautiful, but wherever I go, I always return to the mountains."